1
The B1-Alpha series helicopter is a small military helicopter series used by the Shinra Electric Power Company in the Final Fantasy VII series. Primarily used for scouting missions or for the transportation of small groups or VIP personnel, the B1-Alpha series possesses missile weaponry and a forward mounted gun located under the cockpit, just below the forward spotlight. Possibly due to its mobility, the B1-Alpha seems to be the transport-of-choice for the Turks agency. A structural variant of the B1-Alpha, the B1-Beta Helicopter, also exists.

The helicopters seen in Final Fantasy VII Remake have a different design.

The Player Turk confronts a hijacked B1-Alpha helicopter being used by Avalanche in the abduction of Professor Hojo from Midgar. Unable to bring the helicopter down, the Turks pursue the helicopter through the city, fighting Avalanche members trying to deter them along the way until Sephiroth himself arrives and downs the helicopter.

Tseng and the Player Turk later use another B1-Alpha to travel to the Nibel Reactor where a rogue wind blows the Player Turk's parachute off course, forcing them to walk their way to the reactor.

In their pursuit of Avalanche, in an attempt to take back the stolen support Materia and prevent the summoning of Zirconiade, the Player Turk hijacks another B1-Alpha helicopter and crashes it into the truck transporting the Avalanche commandos.

During the events that end in Zack's Final Stand, the Turks "Gun" and Rude pilot a B1-Alpha in their pursuit of Zack and Cloud. Managing to make contact with Zack on a bridge in the abandoned Mythril Mine the pair lose contact with the two runaways when they enter the mine tunnels where the helicopter can't follow.

Another B1-Alpha is seen being boarded by Turk leader Tseng as he rallies the Turks in a final search-and-rescue mission for Zack and Cloud.

President Shinra leaves the Sector 5 Reactor on a helicopter right before it explodes. Rufus Shinra is flown in a B1-Alpha helicopter when he arrives at the Shinra Building, and also uses it to retreat from a confrontation with Cloud Strife. A B1-Alpha picks Rufus up at Costa del Sol, and is later overflying the Sister Ray at Midgar.

The helicopter that brings Rufus to the Shinra Headquarters is never seen on the field view of the top floor, but it does exist in the game data for the area. It has two positions: one offset outside the platform, and an unused position on the platform. Leaving the helicopter visible during the scenes obscures the characters and its position on the wrong side of the ledge may have been an effort to amend this problem. In the end, the developers decided to make the helicopter invisible.

The helicopter hovering on the battle background in Rufus's boss battle actually counts as an enemy, but it is never targetable in a normal game. If battled via hacks, the helicopter is glitched and does not have a proper death animation. It has 1 HP. 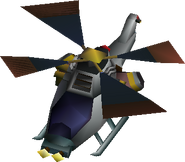 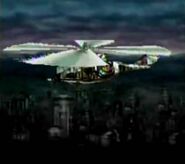 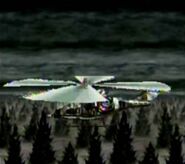 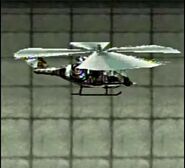 [view · edit · purge]Alpha is the first letter of the Greek alphabet. It was derived from the Phoenician letter "aleph", and it is the source of the Latin and Cyrillic letter "A". In English, alpha is a noun that means "beginning" or "first (in a series)".