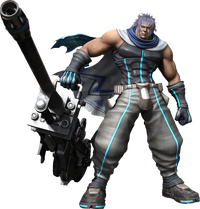 Azul is a boss in Chapter 4 of Dirge of Cerberus -Final Fantasy VII-. He has incredible offensive and defensive power, but is very slow. Azul's defense is so high that normal shots will hardly have any effect other than annoyance.

Luckily, there are some very conveniently-placed barrels all over the battlefield which can be used to quickly blast away Azul's HP, but you must be careful where you are standing, because if he hits one, it explodes and deals heavy damage to yourself. There are also some barrels above in two different rafter-like areas. Shooting them will knock them down, allowing them to be used against Azul.

An alternative strategy that is usually more time consuming, but safer, is to simply use a Limit Breaker.

Retrieved from "https://finalfantasy.fandom.com/wiki/Azul_(Dirge_of_Cerberus_boss)?oldid=3210913"
Community content is available under CC-BY-SA unless otherwise noted.