Brad Abrell
Azul the Cerulean is a minor antagonist in Dirge of Cerberus -Final Fantasy VII-. He is the final recruit of the Tsviets, and a colossal genetically enhanced human who is fought as a boss. He can generate a protective bullet-proof barrier and fights with a giant firearm.

Of superhuman size, Azul stands at a full 9'5. His yellow eyes glow and he has glowing blue streaks on his face due to the mako in his system. He wields a huge firearm. He has cerulean hair and dresses in blues, grays and whites, wearing a cape, tank top, gloves, trousers and boots. Presumably due to being infused with mako, his blood is neon blue.

Azul is a fierce and proud warrior. His goal is facing powerful enemies, and contempts people who are weaker than he is. Largely because of his fierce and bloodthirsty disposition, he initially intended to join SOLDIER, and is the only Tsviet member to willingly allow himself to be experimented upon and "join." He is one of Weiss's most loyal followers along with Nero the Sable, but that seems to be due to Weiss being able to defeat him easily. Azul has some relationship with the others Tsviets, but even though he teams up with Shelke Rui for a time, he actually despises her and hates the fact that she is a Tsviet with a weak body.

Prior to joining Deepground, Azul was a normal man who wanted to be a member of SOLDIER. His reputation for strength attracted the attention of Shinra, who sent the Turks to Costa del Sol during Before Crisis -Final Fantasy VII- to capture him and force him to join Deepground. Azul broke free of his captors, but upon learning of the reason for his capture returned to them and went to Midgar willingly to join Deepground. Azul was the first to be subjected to the Metamorphose experiment, assuming the form of the Behemoth-like Arch Azul and killing his fellow guinea pigs. The display of power earned Azul his moniker and the rank of Tsviet.

Azul is first seen with Shelke the Transparent in a secret room in Kalm. When Vincent Valentine enters the hideout, he charges through the wall and orders several Deepground soldiers to attack him. After Vincent defeats them, he fights Vincent himself, but is interrupted when Shelke loses consciousness. Azul introduces himself to Vincent and tells him they would meet again.

They next meet in the World Regenesis Organization (WRO) headquarters where Azul is dispatched to destroy the WRO and retrieve the Protomateria, as well as terminate Shelke due to her capture making her a liability, an order he is happy to follow. Vincent tries to keep Azul back with his pistol, but it fails to penetrate his barrier. Vincent later comes across a laser cannon, with which he destroys Azul's barrier. Vincent defeats Azul, rendering him unconscious. He is put in a holding cell in the WRO headquarters, but escapes after transforming into Arch Azul.

Vincent fights Azul again on an elevator leading to Deepground's stronghold. Azul initially uses his cannon, but soon transforms into Arch Azul. Because regular bullets have no effect on him, Vincent uses magic and physical attacks. Azul meets his demise when Vincent transforms into Chaos and impales him with his own cannon. Mortally wounded, he comments that Vincent is "more a beast than he was", and tells Vincent he would see him in hell. Chaos hits him with a burst of energy, knocking him off the elevator. Azul screams "Hail Weiss!" and laughs as he falls to his apparent death.

Azul is first fought in Chapter 4 at the WRO Headquarters in Dirge of Cerberus. In Chapter 9 at the Shinra Building, his two stronger forms, Neo Azul and Arch Azul, are fought.

In Before Crisis, Azul is fought twice as a boss in Chapter 4.

Azul appears as a card with his in-game render.

Azul is voiced by Tessho Genda in the Japanese version.

He is voiced by Brad Abrell in the English version. 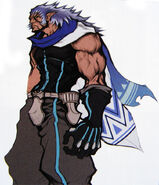 Azul in Before Crisis.

Azul in Before Crisis.

[view · edit · purge]Azul is Portuguese and Spanish for "blue".

Cerulean is a type of blue.