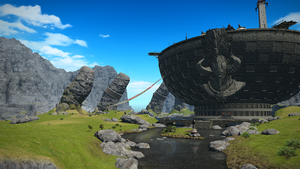 The Azim Steppe is a location in Final Fantasy XIV: Stormblood.

A vast expanse of grassland that stretches across the far reaches of northern Othard, the Azim Steppe is said to be the ancestral home of the Au Ra, and remains to this day the home of the nomadic Xaela clan. Devout worshipers of the Dawn Father and the Dusk Mother─Azim and Nhaama─the Xaela are known for their unique set of beliefs. They are divided into fifty different tribes, all of which are very territorial and are engaged in a constant and fierce battle for land. The people of each tribe are led by their "Khan" or leader, and in turn they are all led by the Khagan, who can be replaced yearly through tribal combat known as the "Naadam". The culture of these Xaela are based on Mongolian tribes, mirroring certain names, customs and fashions.

These vast grasslands are home to many nomadic Xaela tribes.

There are Aetherytes located in the following two areas:

Used by traders from all over to sell their various wares, considered neutral ground and guarded by the Qestir Tribe.

Home of the Mol Tribe, who rely on the Gods to guide them in their daily lives. They tend to move their camp to continue supporting their livestock in the harsh environment.

Home of the Dotharl Tribe. In the language of the Steppe, "khaa" means spring, which is located at the center of their tribe. It is a rare oasis in the deathly dry climes of the Nhaama Desert.

Holy Land to the Xaela, said to be sculpted by the hands of Azim the Dawn Father and birthplace of his son. Azim's face is etched into the base of the province. Currently home to the Oronir and Buduga Tribes.

The Azim Steppe's climate may exhibit any of the following weather conditions:

These named rivers run from the lake at the bottom of the Dawn Throne, they are called "Khaal" which means river.

This section about a location in Final Fantasy XIV: Stormblood is empty or needs to be expanded. You can help the Final Fantasy Wiki by expanding it.
Final Fantasy XIV setting
Retrieved from "https://finalfantasy.fandom.com/wiki/Azim_Steppe?oldid=3243800"
Community content is available under CC-BY-SA unless otherwise noted.