The Azi Dahaka is a boss in Final Fantasy X-2 that appears in the Heart of the Farplane during Chapter 5. If the player tries to pass through any one of the three force fields without deactivating them, they will be forced to fight Azi Dahaka—a powerful enemy with over 140,000 HP. It uses Th'uban's model from Final Fantasy X.

If Azi Dahaka is defeated at the Farplane, it can also appear in Cloisters 70 to 74 of the Via Infinito.

"An extremely powerful fiend that guards the most direct path to Vegnagun. All of its attacks are devastating. The average party doesn't stand a chance at victory."

"An oversouled fiend that doesn't know when to quit. It frequently locks onto one of its foes and unleashes an unending chain of attacks."

Azi Dahaka fights nearly identically to the Guardian Beast fought in the Zanarkand Dome, but it is much stronger. Its physical attack steals HP from a character.

The best way for players to deal with Azi Dahaka is to have a high level party (around level 50–60) containing one or two Alchemists with Mega-Potion. The remaining one or two party members should be either Dark Knights or Berserkers. The Alchemist(s) should constantly use Mega-Potion whenever Azi Dahaka attacks to keep the party's HP up, and another party member should revive any KOed members so the Alchemist can continue using Mega-Potions. The player can also use the Gunner & Cat Nip trick to tackle Azi Dahaka in the original PlayStation 2 versions.

Berserker can use use Eject on Azi Dahaka for an instant win, but it has a low success rate. Escaping is possible; players can commence with three Thieves and have them steal, then flee to procure a plentiful supply of items.

In Oversoul, Azi Dahaka's physical attacks now have the chance to miss, but it can now cast Curse on a character and even focus its attacks solely on one character.

Azi Dahaka can be recruited into the party from the beginning of Chapter 5 onwards. Capturing it requires placing a Trap pod L in Bevelle.

Azi Dahaka comes into the party having learned Attack, Ailment Def., and Total Limit Break. It can learn Flare, Damocles Photon, and Bated Breath in battle.

To enter the Aeon Cup in the Fiend Arena, the player must capture and raise the story levels of eight special creatures. These creatures will immediately be available to be released upon capture, however, what the player has to do is raise their story levels by three and then release them. This will change that particular creature into an aeon. Azi Dahaka is one of these eight creatures, capable of being changed into Bahamut.

Azi Dahaka appears in the Farplane Cup as part of the Hell's Gatekeeper team. It fights exactly the same as it does in the Heart of the Farplane, but much less EXP is given out for fighting Azi Dahaka in the Fiend Arena compared to the Farplane or Via Infinito. 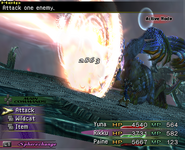 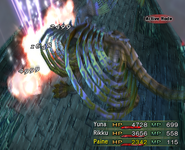