Concurrently, she began work on Final Fantasy XIV Online where she once again provided 2D art and design not only for important NPCs, but also for player character gear and weapons, including the artifact equipment for Job classes, and continued on this role as Lead character concept artist[1] through the game's relaunch as A Realm Reborn and through it's expansions.[2]

Ayumi Namae is credited for designing many of the main characters featured in Final Fantasy XIV, including the Leveilleur twins, Alisaie and Alphinaud, the Senna siblings, Raya-O, Kan-E and A-Ruhn as well as Thordan VII, Yugiri Mistwalker. Krile Mayer Baldesion, Thancred Waters, Y'shtola Rhul, Lyse Hext, Yotsuyu goe Brutus, Ryne, and the various updated looks for the main characters, such as the Final Fantasy XIV: Heavensward look for Alisaie and the Final Fantasy XIV: Shadowbringers looks for Y'shtola and Urianger Augurelt.[1][3] She also designed the game's interpretation of the Viera, defining things such as the facial characteristics.[1][4]

Ayumi was a special guest during the 2019 edition of the Paris Final Fantasy XIV Fan Fest, where there was a gallery with her various works on the game.[1][2][5]

Work within the series[] 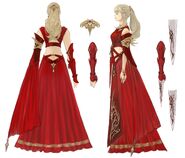 Concept art of Alisaie and Alphinaud Leveilleur by Ayumi Namae.

Promotional art for All Saints' Wake by Ayumi Namae.