One of the few girls capable of using white magic from the Kingdom of Pharm. Though her and Sakura share a teacher-student relationship, with Ayaka trying to earn her master's favor with delicious candies every time they meet, Sakura thinks this is a bit much to deal with.

Ayaka is a supporting character from Final Fantasy Brave Exvius. An inhabitant from the Kingdom of Pharm, she is a talented White Mage, having learned her White Magic from Sakura. She appears briefly in the main scenario and in the story event In Search of True Strength.

Ayaka is a fair skinned girl with very long blonde hair tied in a ponytail tied with a red accessory. Her attire is very much as typical as the norm of White Mages, a white robe with long widened sleeves and red ends, and white boots with a reddish section. She wears a pair of white gloves, and the rod she carries is gold and very long (even taller than herself) and is adorned with several wing-like decorations with a star at the tip, almost resembling the depictions of seraphs.

Kimono Ayaka wears a long pink kimono with a yellow obi and wears her hair up into a bun and wears a flower accessory.

Ayaka is a very kind and caring person, constantly looking out for others and making sure they are in good condition, be it physically or mentally. She is deeply loyal and attached to her master, Sakura and often tries to end her favor by gifting her candy at repeated times.

Although Sakura herself easily falls for the candy this in turn leads Sakura to think Ayaka can be hard to deal with. A running-gag is that Ayaka will try to gift others candy at the very least to make them feel better. Nonetheless Sakura trusted her to keep the people of her town safe, which means that she is quite a reliable person.

At an undisclosed period of time, Ayaka was trained by Sakura in the art of Magic and became one of the few individuals capable of using White Magic in the Kingdom of Pharm. Ayaka holds Sakura and her teachings in high regard and tried to win her favor with candy. Although Sakura grows fascinated by the candy in time she grew to believe Ayaka can be hard to deal with. Eventually Sakura left the town as Ayaka has served as a healer in a land of warriors.

As Rain and his party reach the Town of Sian looking for the Sworn Six of Paladia, Sakura strangely tries to hide behind as Rain, as she claims there is a person she would rather not see. Subsequently Ayaka appears and noticing Sakura decides to gift her candy, causing Sakura to reveal some childish attraction in a rather comical scene. Goken one of the city's Monks returns from an expedition injured and revealing that a monster in blue armor was responsible. Sakura tasks Ayaka to protect the town as Rain's party chases after their enemy, although not before taking the candy with her.

As the Chaotic Darkness looms all over Lapis, Ayaka is later seen comforting a lost kid with candy and reassuring her that Rain's party would protect them from the monster, while promising to gift Sakura a large amount of candy once she returns. She later joins Goken and other citizens into praying for Rain's party, which in turn gifts them the strength to overcome the darkness and dispel the monster's barrier.

Ayaka is an optional playable character, being a 5-7★ Rare Summon. As a White Mage, Ayaka is widely considered to be one of the most powerful healers of the game (though perhaps not as strong as later 5-7★ healers) thanks to potent healing abilities that can restore very high amounts of HP, recover MP, revive or reraise units, remove ailments, immunize the party against the Stop status (while being immune to it herself), and grant HP barriers. Able to dualcast her powerful White Magic, she is a valuable unit all around. She has a variant, "Kimono Ayaka", also a 5-7★ unit.

Ayaka appeared as a guest unit in the some quest of the story event In Search of True Strength. 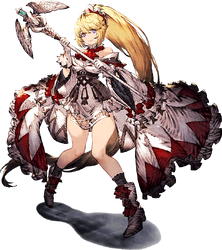 Ayaka appears as a summonable vision and optional playable character. She retains her original appearance. She serves as a character representative from Final Fantasy: Brave Exvius.