Aya Brea (アヤ・ブレア, Aya Burea?) is the main protagonist of the Parasite Eve series who has also appeared in the Final Fantasy series and related titles.

In The 3rd Birthday she is voiced by Maaya Sakamoto in Japanese, and Yvonne Strahovski in English.

In the announcement trailer there is a billboard reminiscent of the LOVELESS boards from the other Compilation of Final Fantasy VII entries that shows a woman with the word "Valentina" written vertically next to her. The woman is the official render of Aya Brea from The 3rd Birthday. This alludes to the "My Bloody Valentine" posters seen in the original Final Fantasy VII.

Conversely, Aya can wear Lightning's Final Fantasy XIII attire, sans cape, as an alternate outfit in The 3rd Birthday, by completing the game 30 times, or by performing tasks on the Square Enix site.[2] Just like any of her other outfits in The 3rd Birthday, the outfit can be torn up as Aya takes damage; Lightning's l'Cie marking is revealed as more damage is done to her outfit. In addition to dressing up like Lightning, in the Japanese version, the outfit will also change her voice to sound like Lightning (the two share a voice actor).

Aya is a secret racer, unlocked once the player completes story mode seven times, and selected by holding the

buttons over Squall on the character select screen. Racing in her NYPD squad car, Aya possesses average speed with excellent turning and controls. As a CPU opponent, she holds onto attack stones and uses them when she gets three of them unless she falls to 5th or 6th.

Aya Brea makes an appearance as a primary promotional card. 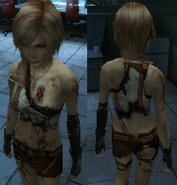