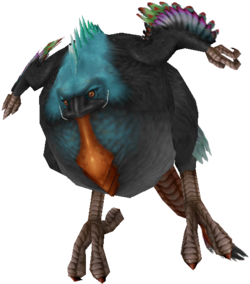 This relative of the cockatrice intimidates its foes with a display of its brilliantly hued wings.

Axebeak (アックスビーク, Akkusubīku?), also known as Axe Beak, is a recurring enemy in the series, appearing first in Final Fantasy IX. They are birds, usually being round, and having a long beak and short wings that end with claws. They are sometimes susceptible to water-elemental damage.

Axe Beaks are relatively weak, Beast-classified enemies encountered on the Mist Continent's Alexandria Plateau, Daines-horse Basin, and Lindblum Plateau. Their Glowing Eyes may put a party member to sleep and they can use Thundara, but due to their low stats the spell doesn't pose much threat. Quina can eat an Axe Beak in order to learn the Blu Mag spell, Limit Glove.

Axebeaks are members of the family Cockatrice characterized by their weakness to water-elemental attacks. They can inflict Stone on their enemies, and may bestow Berserk, Haste, and Quicken on themselves and their allies. 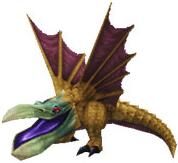 [view · edit · purge]The axe beak is a creature from Dungeons & Dragons. It is described as a prehistoric carnivorous flightless bird which is a very fast runner and an aggressive hunter.