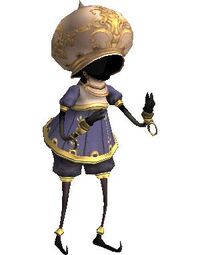 Automatons (オートマトン, ōtomaton?) are a powerful weapon and ally in the hands of a Puppetmaster in Final Fantasy XI. Customizable to any situation, an automaton can be a fearsome fighter battling alongside its master or dealing devastating ranged damage from afar. After a quick change the automaton attacks its enemies with enfeebling and elemental magic while healing its master's wounds, as well as its own. Another change and it becomes a powerful healer, curing and removing status effects from the Puppetmaster's entire party.

Automatons can have three distinctly different frames. Each frame has a different statistical set. The Valoredge X-900 excels at melee combat but due to low defense is not able to tank with any effectiveness. The Sharpshot Z-500 excels at ranged combat and is the most powerful (damage-wise) frame with high level weapon skill such as Armor Piercer. Finally, the Stormwaker Y-700 is a magic-using frame. The Stormwalker Y-700 can attach a Spirit-Reaver or a Soul-Soother head piece to specialize in Black or White magic. It can be noted that the Black and White mage heads can be used with the Valoredge and Sharpshot bodies, however it is uncommon.

When finishing the quest to become a puppetmaster, the player gets an option as to what they would like to name their automaton. Below are the lists. Initially only List 1 is available, but a player can then earn access to the other lists, 2 through 4.

Salvaged from the eerie depths of the Arrapago Reef, Automatons and their mysterious inner clockwork have been closely studied by many a machinist in the recent past. They have since become a common attraction among the marketplaces of the Aht Urhgan capital city, and, with the increased diffusion between the Near East and the Middle Lands as of late, have been drawn as far as the Republic of Bastok. Though the basis of its lifeblood has been quantified and reproduced through synthesis and its personality easily programmable to suit the master's will, each particular Automaton is brought to life by means that are yet unknown.

Academics have noted the similarities between Automatons and the Cardians of Windurst, both in design and application. Just as some Cardians have rebelled against their artificers, so too have some Automatons forsaken their masters and become belligerent toward adventurers. On occasion, the bewitching sways of the Lamiae have been known to seize control of Automatons amid combat. Puppetmasters and their devilish companions have also risen within the ranks of the Troll Mercenaries, commanding authority over their lesser grunts.

Automatons generally come in three different models. Armed with round shield and a devastating pair of shears, the ivory-plated Valoredge X-900 specializes in close combat and defensive tactics. The automaton bedecked in carmine velvet is the Stormwaker Y-700, which employs powerful White and Black Magics to aid their masters and rend their foes. Finally, the bowgun-wielding Sharpshot Z-500 is adept at long range combat, while evading close ranged attacks with the greatest of ease. There is a fourth, less common frame as well. The blue-and-white Harlequin frame, though rarely used by adventurers, is employed by rival puppetmasters to a devastating effect; though specializing in no particular talent, the Harlequin may spell doom for its unwary victims with its stupefying attacks.