Auron appears as a recruitable character and is of the Visitor race with Guard as his main job.

Auron appears as a fire-elemental summon and a character costume for players to obtain.

Auron can be obtained as a summon through the summon drawing shop. His Phantom Stone artwork reuses his promotional artwork from Final Fantasy X.

Auron appears as a playable characters.

A legendary guardian who traveled and fought together with Yuna's father, High Summoner Braska, and Tidus's father, the blitzball star Jecht. Following the last wishes of his comrades, Auron entrusts Yuna to the care of a Ronso named Kimahri and watches over Tidus, Jecht's only son. When Tidus and Auron are reunited, they join Yuna as her guardians and Auron leads the group on their pilgrimage to face Sin.

Auron can be purchased through the online store as a playable character in the iOS release. His appearance is based on his Kingdom Hearts II attire.

Whether in Zanarkand or Spira, Auron never fails to appear before Tidus. He propels Tidus onward with his sharp words, but his reason for watching over the youth stems from a tragic past and a final promise exchanged between him and Jecht...

Auron is an unlockable character, and is one of the few to have a second variation. The first is based of his Final Fantasy X attire, and is unlocked by collecting Turquoise Crystal Shards. The second is based on his Kingdom Hearts II attire, and is downloadable. 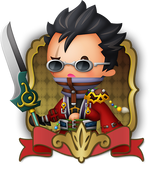 Auron appears as a playable character. His initial weapon is the Djinn Blade.

Auron is an ally and a summonable Legend. He is depicted in his default Final Fantasy X outfit. His EX abilities are Banishing Blade, Shooting Star, Dragon Fang and Tornado.

This unsent monk is a decade dead, but still chugs nog as a weapon, not a vice.

Auron is an exclusive character available from the Premium Character Shop as a random downloadable content, he uses the Dragon Fang attack during battle.

Auron appears as an optional player character and could first be recruited during the Challenge Event Ultimate Guardian as the First Time Reward for completing the the event's Gagazet stage on Classic difficulty. He has also appeared in Defying Fate and Window on the Past.

Auron is represented by Fire-elemental cards. He is depicted in his Final Fantasy X promotional poster art, his official artwork and in a screenshot of the opening FMV in Zanarkand, and in his Theatrhythm Final Fantasy artwork. 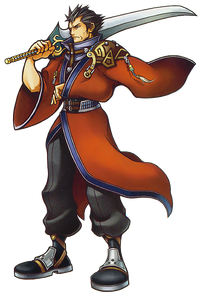 This is my story...and you're not part of it.

Auron appears in Kingdom Hearts II as a party member. Aside from his younger appearance, allusions are made that he is the same Auron, rather than a character adapted into the Kingdom Hearts storyline.

When Pete jokingly suggests Hades save Hercules the trouble of beating his next opponent and "send someone already dead" after him, Hades agrees and revives Auron, "the mother of all bad guys", offering him freedom from the Underworld if he kills Hercules. Auron refuses to help Hades and joins Sora. Later, Hades steals Auron's willpower using a statue of his likeness, and forces him to fight Hercules. Sora retrieves and destroys the statue, and Auron regains his free will before he can kill Hercules.

The three team up to defeat Hades together, and afterward Auron decides to go out and shape his own story, referring to his comrades of Final Fantasy X, mainly Tidus and Yuna, who both have the famous lines "This is my story...", a theme of Final Fantasy X. Sora receives the Guardian Soul Keyblade, modeled after Auron's Masamune from Final Fantasy X. During the ending, Auron departs back to the afterlife, dissolving into pyreflies.

Auron is voiced by Matt McKenzie in the English release and by Hideo Ishikawa in the Japanese release, both reprising their roles from Final Fantasy X.

Auron makes an appearance in Kingdom Hearts χ [chi] as one of the obtainable character cards. He appears in the remake, Kingdom Hearts Union χ[Cross], on several medals. He also makes a cameo in Kingdom Hearts III, represented as a stone statue in the narration of the Olympus world, with the narrator referencing Hades attempt at using him to advance his plans of conquest.

A chibified version of Auron appears in Dragon Quest & Final Fantasy in Itadaki Street Special, alongside chibi Tidus and Yuna in their Final Fantasy X attire. 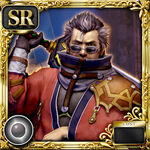 Auron makes an appearance as a card.

Auron appeared as part of the Final Fantasy collaboration. He was introduced in the collaboration event that happened in the North American version from November 28, 2016 to December 11, 2016.