The legends of your holy auracite are lies! The Stones are magicite—they hold in them power for evil.

Auracite (聖石, Seiseki?, lit. Holy Stone), also called Holy Stone or Zodiac Stone, is a form of magicite in the world of Ivalice. They are crystals, a recurring motif in the Final Fantasy series. They are magical in some way and sometimes aligned with the zodiac signs.

It is said the Yarhi are the sword given us by the Eternal when He forged this land. Using auracite, we call them from the realm of illusion to do as we bid.

The Occuria created auracite from two large crystals called auraliths that contained tremendous amounts of magick, in much the same way they had created nethicite from the Sun-Cryst. The Occuria gave this auracite to Feolthanos, the leader of the aegyl, intending to use him as they had used King Raithwall. Feolthanos enraged the Occuria by refusing to serve them; instead he and the aegyl fled to the sky continent of Lemurés where he used the auraliths to create a barrier around his floating world.

Aegyl use pieces of auracite to summon Yarhi (called Espers by those from other parts of Ivalice) through a device called the Ring of Pacts. The auracite has an effect the aegyl are unaware of: creating a guardian Yarhi strips away part of the user's anima and transfers it to Feolthanos.

Thus, through thousands of years using auracite to defend themselves against unbound Yarhi, the aegyl have been reduced to little more than soulless shells while Feolthanos has grown more powerful. Feolthanos has collected so much anima that he has crystallized and become an auralith himself. While the party speculates that the sky pirates who have begun using auracite may have started to lose their anima, none of the party members from outside Lemurés seem to be affected.

So armed, these heroic souls conquered god after god, oblivious to their weapon's fatal imperfection: its propensity to bleed primal energies. And with each victory, the heroes changed, transforming at last into fiends of endless appetite. Insatiable in their hunger for aether, they ultimately went to war over the star's ever-dwindling life force...

Auracite is mentioned by Unukalhai as being involved in the fate of another world. It was used by its realm's champions to contain the power of primals, but due to a fatal flaw, it gradually bled out the energies and changed its wielders into fiends of endless appetite, devouring their world's life force.

A similar object, the White Auracite, was a pale stone that could be used to trap an Ascian, allowing them to be destroyed by striking it with sufficient amounts of aether. The Warrior of Light uses these to destroy Nabriales, Igeyorhm, and attempt to destroy Emet-Selch, and Elidibus.

A form of auracite created by Ultima, an otherworldy being, can be found in Dalmasca. This type of auracite was also used centuries ago by the Zodiac Braves in a story similar to the one from Final Fantasy Tactics. Auracite can transform their wielders into Lucavi, by feeding on and amplifying their greatest desire, and then absorbing their aether and transforming it before returning it to their body, turning them into monsters. The form the auracite's wielder takes is dependent on the individual, not on the auracite; although Argath Thadalfus and Ba'Gamnan both used the Taurus auracite, they became entirely different Lucavi: Duma and Yiazmat, respectively. Auracite can also be used for good - the Zodiac Braves turned themselves into heroic Lucavi to keep Ultima sealed and test her would-be vanquishers. Even after Ultima is gone her auracite still works: Sadr rem Albeleo and Gilbrisbert quo Buteo have stones that can transform them into Adrammelech and Cúchulainn, respectively, and the sword Save the Queen was crafted from auracite by the Allagan Empire.

Cid Garlond believes that the Heart of Sabik encased in the Ultima Weapon was a type of auracite, and in the Japanese version Lahabrea explicitly names it the Black Auracite Sabik (黒聖石サビク, Kuro Seiseki Sabiku?, lit. Black Holy Stone Sabik). Synthetic auracite based on the Heart of Sabik is employed by the VIIth Imperial Legion as cores for their Ultima Weapon-based prototypes: the Ruby, Sapphire, Emerald, and Diamond Weapons. They contain Oversouls based on skilled Garlean military personnel (Nael van Darnus, Regula van Hydrus, Gaius van Baelsar, and Alfonse, respectively), fusing the pilots with the Weapon's core and replacing their personalities with another soldier. A flaw in the Ruby Weapon's Oversoul turned its pilot into a manifestation of van Darnus, though this was rectified with the Sapphire Weapon.

The thirteen auracites are crystals that hold the spirits of the Lucavi, demons from another realm, some of which appear as Espers in Final Fantasy XII. Auracites are known as the twelve Holy Stones/Zodiac Stones of the Zodiac Braves of Ivalician legend.

The story of the Zodiac Braves is a legend regarded by the Church of Glabados as the central doctrine of its teachings. The twelve Zodiac Braves are said to have fought the Lucavi, driving them back into the spirit world. The legend foretells that the Braves, carrying the Zodiac Stones, would come to save humanity should they ever be in peril.

Rapha's Miracle of Scorpio Soul Break has her produce a glowing object, presumably the Scorpio stone, to provide the party with a magic buff. The Soul Break alludes to how she used the Scorpio stone to save her brother Marach's life in Final Fantasy Tactics.

Artwork of an auralith in Final Fantasy XII: Revenant Wings. 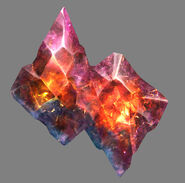 The stones are called Zodiac Stones in the original release of Final Fantasy Tactics. [view · edit · purge]In both astrology and historical astronomy, the zodiac is a circle of twelve 30° divisions of celestial longitude that are centered upon the ecliptic: the apparent path of the Sun across the celestial sphere over the course of the year.