Robert Vernon
Aulus mal Asina is a minor antagonist from Final Fantasy XIV. He is a Garlean scientist serving under Zenos yae Galvus.

Aulus mal Asina was a talented scientist within the Garlean Empire who sought to study the Garleans' inability to wield magick at the same levels as other Eorzeans. Aulus became prideful of his work, arguing that Garlean genome could be altered to support aether manipulation. The imperial court ridiculed his work and Aulus lost funding.

During the Eorzean invasion of Ala Mhigo, crown prince Zenos Galvus approached Aulus, the only high-ranking imperial who saw potential within his research and supported him. By using the Echo of the captured Scion Krile Mayer Baldesion, Aulus successfully implanted an artifical Echo within Fordola rem Lupis, and later implanted an Echo within the first ever Garlean—Zenos—making him the first Resonant.

During the battle of Ala Mhigo, Aulus joined the defense of the palace from the Eorzean invaders. When the Warrior of Light confronted him, Aulus used a special device to separate the Warrior's soul from their body. The Warrior was able to return to their body and slay Aulus.

The Ascian Fandaniel later used Aulus's soul-separation technogies to temporarily switch Zenos and the Warrior's bodies, intending to have Zenos kill the Warrior's friends. The process was truly temporary, as the Warrior's soul was eventually forced to return to their original body.

Aulus is a scientific genius who is proud of his Garlean heritage and strives to remedy his people's inability to wield of magicks. Despite claiming that Garleans are intellectually and physiologically superior to other denizens of the Source, whom he calls "lesser races", he acknowledges that his people lack the means to wield magick at the same level as those from Eorzea.

His proposal to alter Garleans' genomes to become able to wield magicks was met with skepticism and suspicion. Aulus was supremely annoyed with such views, and fortune came when Zenos offered him the funding to continue his work. As a result, Aulus is grateful and loyal to Zenos.

Aulus is fought as the second boss of 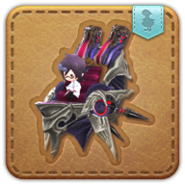