Template:Vehicle The Audi R8 Star of Lucis car is a one-of-a-kind replica of the vehicle that appears in the Kingsglaive: Final Fantasy XV feature-length CG film as product placement. It is also mentioned in Final Fantasy XV Prologue Parting Ways as being Prince Noctis's car. In-universe, the car manufacturer is said to have teamed up with the Royal Art Society of Lucis to create the car to celebrate the 20th birthday of the prince, the heir to the throne.[1] Square Enix first announced its partnership with Audi during Uncovered: Final Fantasy XV, and that a custom redesign of the Audi R8 was to serve as the official state car of Lucis's royal family.

The "Ultrossic Black" car features "Advanced engineering from a higher realm." Its arabesque patterning (said to be the traditional pattern of the Tenebrae oracle clan) and Lucis emblem wheels showcase the "Design inherited from the gods." "An interior fit for the Prince" and "Performance worthy of the future King" ensure the driver enjoys an exclusive experience. Should danger block the car's way, its "5.2-liter R8 V10 engine generates 610 PS," which endows the driver with "The power to foil monsters." Maximum speed is 330km/h.[2]

The front of the car. 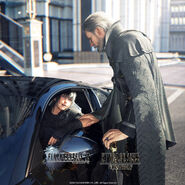 Anniversary wallpaper.
Add a photo to this gallery

"Star of Lucis" may refer to Noctis, for whom the car was supposedly produced in the world of Final Fantasy XV. Noctis Lucis Caelum is a Latin phrase that may mean either "Sky of the Night's Light" or "Sky of the Light's Night". Noctis and his father, King Regis, share a similar naming theme pertaining light and sky.