Many for sale on auction

The Auction House is a location in Final Fantasy VI located in the city of Jidoor where the player can bid on various randomly appearing items. Most items are sold infinite times, but there are some that can only be bought once, and some that cannot be bought at all because a spoiled rich kid's father always bids the highest price.
See also: Auction house

The auction house opens once the player has completed the Magitek Research Facility and acquired the Blackjack. Speaking to the doorman will have the party automatically sit down and the item for bid be introduced, and then bidding begins. The item offered may be a rare Relic, a magicite, or on occasion, a "joke item" that the player cannot ever purchase, as a rich man with his son will always bid an outrageous amount of money on it that the auctioneer accepts immediately. In the Game Boy Advance version, Excalipoor will also go up for bid in the World of Ruin after speaking to an NPC who mentions a rare sword. If the player passes up purchasing a unique item, it will reappear at a later auction until the player purchases it.

The player is always given two chances to participate in the bidding, but the first opportunity is irrelevant - regardless of whether the player bids or not, the next bidder will increase the bid by the same amount. If the player bids the offered price the second time, they will receive the item, but if they decline or have insufficient funds, the item will be bought by someone else. There are two exceptions to this pattern - when bidding on joke items, and when bidding on Excalipoor, the player is given three chances to bid.

The following is a list of items for sale, their price, and their chance of appearing.

In the Game Boy Advance version, in addition to the items listed below, Excalipoor has a 50% chance of appearing in place of the usual items each time the next auction begins if the player has spoken to the NPC who mentions it. It is a unique item and costs 500,000 gil.

Both Espers and Hero's Ring purchased[]

It is possible to force the two espers to appear by rapidly entering and re-entering the auction house and watching the movements of the female NPC outside. When the party appears outside the auction house, as they return inside the NPC will move once. By tracking her movements each time the player enters and re-enters and watching for specific patterns, the next time the player speaks to the doorman, the item for bid that time will be a magicite. Dashing is necessary for this method of RNG manipulation to work reliably.

NPC walking:
Golem: Up, Up, Right, Left
Zona Seeker: Right, Down, Down, Right

"Spinach Rag" plays inside of the Auction House.

There is an unused line of dialogue for the auction house where someone bids 100,000 gil, and in a different manner than other bids, with the speaker addressing the bid to the auctioneer rather than just shouting it. It is unknown for what purpose this line would have been used; in the SNES release, no bidder at any time offers 100,000 gil, and the bidder that bids 100,000 gil for Excalipoor in the Game Boy Advance and subsequent versions does not use this specific dialogue.

Among the other items for sale on the stage, there is an unused sprite of Ultros with a misassigned palette. There is no event data associated with this sprite. 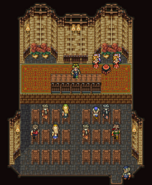 Unused sprite of Ultros on the auction block (SNES).

Unused sprite of Ultros on the auction block (2014 mobile/Steam).