Attack formations are the types of battle formations that an encounter can begin with in games where battles take place in a different plane than field gameplay. It usually determines who gets to attack first. 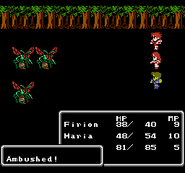 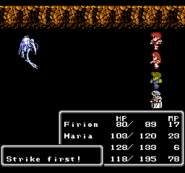 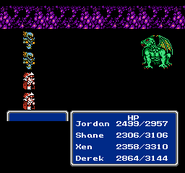 A Back Attack (iOS). 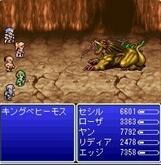 Like the previous two titles, the attack formations function the same way as they did previously.

Not all enemies can be preempted; it depends on the enemies and their pre-coded battle formations. Some enemies always back attack the party unless they have the Thief's Caution ability equipped. The Ninja learns First Strike, which doubles the party's chance of a preemptive strike from 32/256 (or 1/8) to 64/256 (or 1/4). If the party is back attacked, they can use the Return spell to start the battle over, usually without the back attack.

If any character is equipped with an Alarm Earring, pincer and back attacks are disabled (except when fighting Tyrannosaur). If Gau is learning a new Rage on the Veldt, he will not return to the party in a side, back, or surrounded attack.

Final Fantasy VII has three types of special formation battles, similar to those in Final Fantasy VI: Back Attack, Side Attack, and Ambush (Pincer Attack). In Back Attacks, the player's party starts in the begins facing away from the enemy (unless equipped with Sprint Shoes) and thus takes double damage from the first attack, with the normal formation reversed (party members in the back row start in the front row, and vice versa). In Side Attacks, the party is cut in half and surrounds the enemy in the middle. In Ambushes, the opposite happens, with the enemy surrounding the party.

The same rules with rows apply as in other games: characters in the back row deal and receive half physical damage, while characters in the front row receive full damage. Any long range attacks, Limit Breaks, magic, summons, items and some abilities are unaffected. In addition to this rule, attacking an enemy facing away from the party will cause that attack to deal double damage, though that enemy will then turn to face the party. The same is true of the opposite, as enemies in a Back Attack or Ambush can hit a party member from the back and deal double damage. Certain bosses take more damage from the back than usual.

Equipment can be acquired to help deal with disadvantageous special formations. Sprint Shoes guarantees that the player is never facing away from an enemy in Back Attacks. More importantly, a mastered Pre-Emptive Materia halves the chance of a Back Attack or Ambush ever occurring, while increasing the chance of a pre-emptive attack.

Cait Sith's Slots has two outcomes that usually end the battle: Death Joker and Game Over, that kills all allies or all enemies, respectively. In a Side Attack or Ambush, however, these can only target one enemy or ally party.

The player can guard against back attacks with Cerberus's Alert ability, although it does not protect against fixed encounters, such as the second fixed Ruby Dragon battle at Deep Sea Research Center before fighting Bahamut. The Initiative ability allows the party member to begin a battle with a full ATB bar, but there is no ability to increase the rate of preemptive strikes.

In a pre-emptive strike, the player starts with full ATB on all party members whereas the enemy, that is facing away, starts with none. Physical attacks to the enemy's backside deal more damage.

Without the Initiative ability, there is a 12.5% chance of being Ambushed, and a 12.5% chance of getting a Preemptive strike. With Initiative, there is a 25% chance of a Preemptive strike and all Ambushes are eliminated (except certain enemy encounters), as long as the character with Initiative is in the active party. The player can use the First Strike ability to always get a turn first, even while being ambushed. This is especially useful because characters can be swapped during battle.

The player can use a Deceptisol to make themselves invisible to enemies, and thus always get a preemptive strike. The oretoise and ochu enemies are exceptions.

Random battles engaged on the world map can start as ambushes or as first strikes, in the addition to normal engagements. If the party pre-emptives the enemies, either the opponents start with a disadvantage (such as with Killsight on them, dying in one hit if one is fast to hit them) or the player party begins with a random buff. If the enemies ambush the party, either the opponents start with an advantage (such as the Rage status) or the party starts with a disadvantage (such as the Killsight or Stop status). If the option to replay the battle against higher level enemies comes up, the attack formation from the first battle does not carry over. 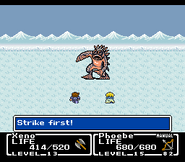 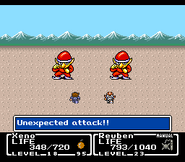 Any unit with the Stealth, Warning, or Forseen (sic) skills may give the first attack to its party. Because of space limitations and translation errors, this is displayed as
"[LPMU] initiate an attack" or "Enemy initiate an attack", where LPMU is the name of the lead unit. This is the only advantageous formation possible. 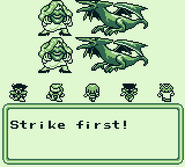 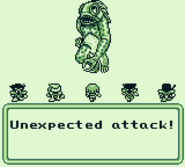