Non-player character
Atomos is a Pulse fal'Cie that digs underground tunnels along the Mah'habara Subterra in Final Fantasy XIII. Its appearance is akin to a spherical boulder with a spinning circumference of glowing spikes. The fal'Cie also serves as a transport for whoever can stop it, possessing a partially hollow interior.

Atomos toils endlessly beneath the surface of Gran Pulse, ever extending the world's network of snaking, subterranean passages. Common speculation purports that the fal'Cie's goal is excavation of habitable underground environments, but the truth of the matter is shrouded in mystery.

What is known is that Atomos's digging often exposes deposits of valuable mineral resources. For this reason, the human inhabitants of Gran Pulse long ago established mining operations in Mah'habara.

Atomos is first encountered in the Mah'habara Subterra, when the l'Cie are inside the derelict mining facility. Snow suggests they use it as a means of transport. The party are aided by a group of Juggernauts, who work together to halt Atomos and save Hope. Afterward, the l'Cie ride Atomos between the Mah'habara Subterra and the Sulyya Springs, and can use it as a platform to access previously inaccessible parts of the mine.

After the fusion of Gran Pulse and Valhalla, Atomos appears to have made the Dead Dunes its final resting place. It forms part of a craggy area, and while it has become immobile, its spikes glow during the night. Atomos has rendered itself immobile, and quietly waits for the end of the world.

Atomos's model exists in the game disc of Final Fantasy XIII-2 in two versions, one close-up, more detailed model, and one model for viewing further away. Atomos never appears in the game, however, making the models dummied content.

Atomos appears as an earth-element ability card. Its artwork was illustrated by Pablo Fernandez. 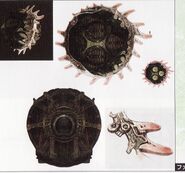 Artwork of Atomos at Mah'habara Subterra.

Atomos in the Dead Dunes in Lightning Returns.