Atomos is a Rank III Mark in Final Fantasy XII. The hunt becomes available after felling Judge Bergan at Mt Bur-Omisace. Atomos can be found in the Northern Skirts area of the Mosphoran Highwaste. Atomos is part of the Jovy side quest in Nalbina.

Atomos is also the name of the ship used to escape the Dreadnought Leviathan after defeating Ghis.

Being a mutant Slaven, its body encrusted with all Manner of precious Crystals. With the passing of Months and Years, the Impurities in these Crystals are gradually absorbed by the Creature, purpling their natural Ochre Hue to beautiful Effect. These Crystals are traded for a high Price, making their Bearers the Target of much Over-hunting by Soldiers tasked with acquiring Funds for Archadia's War Effort. So have these Slaven learned to fear and attack Men, and for this Reason was a Bill for this Mark posted.

Atomos can be inflicted with Disable and Sleep. It can use Purify to heal its statuses when it's not incapacitated and White Wind to immunize itself against statuses, and the effect lasts for around two minutes.

The player can try to take out the Vultures first without alerting Atomos. Two tanks and a caster-ranged-fighter mix is a good setup. One should cast Protect on both tanks, then Haste, then Bravery, and finally Berserk.

The Nihopalaoa + Remedy trick can be used to inflict both Disable and Sleep on Atomos.

Atomos has HP Attack when the battle starts and it ignores evasion, making equipping shields useless, although inflicting it with Blind will still cause its attacks to occasionally miss. If not afflicted with Disease the mark uses Restore once it loses half HP, but when it goes critical, it stops using it. When it is in low health it only attacks non-stop. 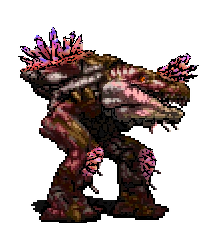 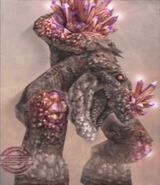 [view · edit · purge]Atomos is the Greek word meaning "indivisible" and is the the origin of the word "atom" which means "that which cannot be cut". Also, Atomus or Atomos was a Jewish Cypriot magician who appears in the Antiquities of the Jews by Josephus, working for Felix at Caesarea.