Atomos is an eidolon in Final Fantasy IX who can be acquired as a summon for Dagger that deals fractional damage to enemies, similar to Vivi's Demi spell, but with potential to be much stronger. Atomos is a summon who takes the form of a monster with a giant mouth that sucks everything into its depths, based on the boss with a similar mechanic from Final Fantasy V. Besides being a summon for Dagger, it also appears in a story scene.

Atomos was an eidolon that manifested to protect the crystal of Gaia. The practice of summoning it presumably went back centuries, as it appeared on a mural on the Eidolon Wall in Madain Sari, the summoners' village on the Outer Continent. As the summoners left the Mist Continent 500 years ago, summon magic fell into legend among the Mist Continent populace.

After the king passed, Queen Brahne became power-hungry and wanted to conquer the Mist Continent with the aid of eidolons extracted from Garnet and with a new army of black mages. Her eidolons stolen from her, Garnet escaped Alexandria Castle with her new friends and wound up in Pinnacle Rocks near Lindblum from where she witnessed Brahne deploy her army of black mages upon the city. As the city guard assembled to defend the city, Brahne used an amethyst to summon Atomos that sucked in the Lindblum soldiers, the black mage army, buildings, and everything else in the eidolon's vicinity, much to Garnet's horror. Lindblum immediately surrendered.

After Brahne's death when the Bahamut she summoned upon Kuja turned on her, Garnet became queen and ended hostilities against the other nations, inheriting the gems into which her eidolons had been extracted, an amethyst among them. Using the amethyst, Garnet learned to summon Atomos.

Atomos is a large purple monster with a colossal mouth into which it sucks everything in front of it, seemingly bending reality itself to transport enemies to another dimension. It has no discernible body parts besides the mouth, which itself is framed by a row of teeth and what appear to be tusks. When summoned by Queen Brahne, Atomos is gigantic, towering over even Lindblum Grand Castle, but when called forth by Dagger, it appears in a smaller form, perhaps to fit the size of her individual enemies.

Atomos costs 128 MP to summon before Garnet/Dagger loses her eidolons, and 32 MP after learned from a piece of Amethyst for 25 AP. Doctor Tot gives Garnet an amethyst as part of the story after the party returns to Alexandria from the Outer Continent. To get more, the player can synthesize them in Daguerreo and Black Mage Village (endgame) and at Hades, find 21 in the "Outer Island" chocograph treasure, and 13 in the "Forgotten Island" chocograph treasure. One is also found lying around in Alexandria after the event with Garnet and Eiko atop Alexandria Castle. Amethyst drops from Ring Leader and Torama.

Atomos's attack, G-force 199, deals percentage-based damage to all enemies capped to 9,999, based on the amount of Amethysts in the player's inventory.

When Dagger summons during her Trance, there is a random chance the summon will reappear during the battle for zero MP cost, but the animation will always be the short version. The summon will reappear in intervals to repeatedly damage the enemy until a new eidolon is summoned or until Dagger exits Trance, is KO'd, or ejected. The Boost ability makes the summon always do the full animation, but it costs many Magic Stones and takes a long time to learn from the Pumice Piece.

If the player has a lot of Amethysts, Atomos can be Dagger's most powerful eidolon, dealing reliable 9,999 damage to enemies that are not immune to it. It can thus be good against Yans when going with damage-dealing strategies over Instant Death (in which case Odin is the eidolon of choice). Summoning Atomos earns the Bringing Down The House achievement in the mobile and Steam versions.

Atomos has an eidolon-type card for Tetra Master, which can be obtained late into the game. Curiously, the card may drop from the boss Ark. 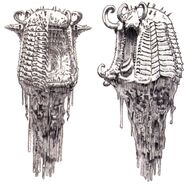 Atomos's attack is called G-force 199. [view · edit · purge]g-force (with g from gravitational) is a measurement of the type of acceleration caused by mechanical contact-forces between object surfaces that indirectly causes weight.