Asura, queen of the Eidolons... Lady Wife of the Eidolon King, and gatekeeper to all who would address him. Only those possessed of wit enough to turn her strength against her, and so overcome her challenge, may address the king himself.

Asura is a character in the Final Fantasy IV universe. She is the co-ruler of the Feymarch and Eidolons alongside King Leviathan, and must be defeated to speak with the king.

Asura can be found underneath the Eidolon Library, and offers her power to Rydia if the party is able to defeat her in battle. When they prevail, Rydia learns the Asura summon, and the party can challenge Leviathan.

A year later, Rydia speaks to Asura on her way out of the Feymarch to attend the celebration of Damcyan's reconstruction. Asura suggests to Rydia she return to the human world for good, as it is where she truly belongs, and allows Rydia to depart.

At the beginning of Rydia's Tale, Rydia returns to the Feymarch to visit, but Asura greets her coldly, telling her she is no longer welcome in their world and asking her to leave. Though Leviathan protests, the reunion ended when Leviathan senses one of the Maenads approaching. He teleports Rydia to safety as the Maenad petrifies him and Asura, seizing control of them.

In the Lunarian's Tale, another Maenad summons Asura against Fusoya and Golbez. Asura fades when her summoner Maenad is killed.

In The Crystals, Asura is encountered in the Depths of the True Moon. If the party is without Rydia, she is killed, calling out Rydia's name. If Rydia is present however, Asura survives the battle and is freed from the control of the Maenads. She thanks Rydia for freeing her, and apologizes for being cruel to her when she arrived at the Feymarch, admitting she did want to see Rydia again. If both Asura and Leviathan are saved, they appear during the battle with Bahamut and call out to him, helping him return to his senses.

In the ending, if they were not saved in the Depths, Asura and Leviathan are revived with the other Eidolons. In all endings they arrive at Mist to visit Rydia, telling her that simply because she cannot visit them does not mean they cannot visit her.

Asura is an optional boss fought in the Feymarch. Defeating her is required to challenge Leviathan and later Bahamut and earn them as summons.

Asura is fought in the Impact Crater on the Red Moon under the control of a Maenad, acting as a supporter to her. Asura is fought alone in the Depths and can be earned as a summon if defeated while Rydia is in the party. 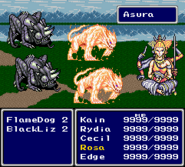 Asura summoned in The After Years.

Asura summoned in The Complete Collection.