The curse of Astos will follow you to your dying day!

Astos is the evil king of the Dark Elves in the original Final Fantasy. He is fought as a boss in the Western Keep where he is found disguised as a king.

In Final Fantasy I & II: Dawn of Souls and future remakes, Astos appears in the Whisperwind Cove. There is a room with flame-like spirits which must be calmed so they can go rest in peace. One of those souls is Astos, seeking revenge and attacking the party when he encounters them. After his soul is destroyed, he curses the Warriors of Light before fading away.

Astos and his cronies attack Elfheim before the Warriors of Light arrive, placing a curse on the Prince of Elfheim (that puts him in an endless sleep) and sacking the treasury. He steals Matoya's Crystal Eye to prevent her from making a potion to revive the Prince, and poses as a weak old king in the Western Keep and tricks the Warriors of Light into recovering the Crown from the dangerous depths of the Marsh Cave. When the Warriors return, Astos shows his true form, but the Light Warriors destroy him.

Unlike Garland, Astos is the first truly challenging boss players are likely to face, particularly in the NES, MSX and "classic mode" Final Fantasy Origins versions. While his HP pool is still unimpressive, his physical and magical defense are high.

Astos has a tendency to lead off with Death/RUB, which, if the player is unlucky, will immediately leave them down a party member. If the fight drags on, Astos can cast Death repeatedly, which can make short work of a party and leave them unable to damage him fast enough to win. Astos can use Slow 2 and both Fira and Thundaga.

If Astos is encountered in the Whisperwind Cove, he will retain the same stats and attacks as before, and since the Light Warriors will have grown more powerful by this point, the fight will be short.

Being on level 8 or 9, with a generous helping of Mythril Swords on those who can use them, is typically the recommended level for Astos to not present much of a roadblock.

To defeat him, physical attackers should use Attack while Hasted, as this is the first battle in which the player is likely to have access to Haste. Red and White Mages should spread around NulBolt and NulFire, and heal where necessary. Black Mages should use Tier-2 magic, such as Fira, when not keeping the physical attackers Hasted. In Dawn of Souls and onward, the player should prepare with some Phoenix Downs or the spell Life in case Astos lands Death; players of the NES, MSX or Origins (normal) versions, however, will simply have to adapt (or reset; using a Tent outside Astos's Castle is recommended for "save-scumming" the initial Death use).

Another strategy is to cast Silence at the beginning of the battle to prevent Astos's spells, particularly Death; without them, he simply has an average-for-his-level physical attack, even when hasted. By using the item Cockatrice Claw, which can be won by finishing in third place in the ship's 15 Puzzle, has a small chance of an instant KO. The latter option is only available in newer versions of the game.

Astos appears as an enemy. 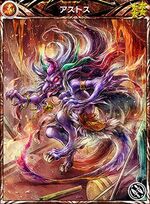 Astos appears as one of the main supporting characters in Stranger of Paradise Final Fantasy Origin.

Astos appears in the 34th episode "The Fractured Fantasy of Captain N" under the disguise of a friar who has the Light Crystal guarded within his castle, trying to overthrow the Prince and take his kingdom. His true form is revealed by the light of the crystal. Astos wields a sword like a staff and the sword's design is similar to the North American version of the Final Fantasy IV logo of the Super Nintendo. His sword function as a normal sword, but the pommel of the sword is a magical jewel that can shoot a beam of energy and cast enchantments.

Astos's likeness inspired the appearance of the Dark Elf in Final Fantasy IV. The PSP battle sprites of the two are identical.

While decidedly different in appearance, Astos and the other dark elves are based on the drow from Dungeons and Dragons. 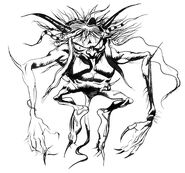 Artwork from Nintendo Power of Astos in disguise.

Death in the 20th Anniversary version.