Popular among assassins, this dagger has the power to doom its victims to certain death.

The Assassin's Dagger (アサシンダガー, Asashin Dagā?), also called Assassin Dagger or Assassin, is a recurring dagger in the Final Fantasy series. It is often among the stronger weapons for Thieves and Ninja and inflicts instant death on its targets. Due to this, the weapon proves ineffective against undead enemies, often restoring them to full health.

A dagger that casts Kill when used.

The Assassin Dagger casts Kill when used as an item, and boosts 30 Attack, 40 Accuracy, 10 Evasion, 3 Agility, and 2 Intelligence. It can be used by all classes except Monk, and is found in the Whisperwind Cove.

Dagger that has a chance to kill with one blow.

Assassin Dagger (Assassin in the SNES version and Combat Knife in the Easy Type version) is the weaker version of the Assassin's Dagger introduced in the GBA version. The weak version has an Attack power of 29, Accuracy of 55%, +5 Strength, +5 Agility, +5 Stamina, -10 Intelligence, and -10 Spirit. It can inflict instant death. This dagger was dummied out and cannot be obtained via normal means. The weapon can still be found within the data of recent versions.

The second Assassin's Dagger can drop from the Chaotic Knight and purchased in the Lunar Ruins. It is the strongest equippable dagger (since the Kitchen Knife is not equippable in the 2D versions), boosting 130 Attack, as well as 49 Accuracy and +15 Agility. It has a chance to inflict instant death on hit. It appears in the Advance and The Complete Collection versions.

The weapon is bugged in the North American and original Japanese releases of the Advance version, and does not inflict Death on hit. The bug was fixed in the second Japanese release and the European ports. Both version of the Assassin's Dagger are metallic weapons.

The Assassin's Dagger is a high-ranked dagger that provides 85 Attack and 40% Accuracy. It is found in the Depths after defeating Lich. A similar weapon, named the Assassin Knife, exists in the game's code, but was dummied out. It would have been equipped by Cecil, Ceodore, Kain, Rosa, Golbez, Rydia, Palom, Edward, Calca and Brina.

Dagger that sometimes finishes enemy in one blow. Can be used with Spellblade.

The Assassin Dagger is one of the twelve Sealed Weapons. It has a 25% chance to cause instant death on a hit, and boasts 78 attack and +1 Speed. The instant death works on enemies that are not immune to Death, even Heavy targets. It restores the undead to full health.

Blade that may randomly dispatch an enemy in one hit.

Assassin's Dagger can be found in the Cave to the Sealed Gate in a chest to the right of the cave's entrance. It has an attack power of 106, +3 Speed, +2 Magic, and has the chance to inflict instant death. It enables the Runic command. It can also be metamorphed from Ninja, Covert, and Outsider, and won in the Dragon's Neck Coliseum by betting the Valiant Knife and defeating a Baalzephon. Betting the Assassin's Dagger will net the player a Swordbreaker if they defeat a Test Rider.

The weapon is affected by the Capture glitch.

Auron's katana is named the Assassin Blade when equipped with the Deathstrike ability.

In the original version the Assassin's Dagger can be used with the Daggers 2 license for 20 LP. It provides +25 Attack, +5 Speed, and has a 5% chance of instant death on hit. Assassin's Dagger is among the slowest daggers, but it is still faster than all other types of weapons, apart from ninja swords. It is sold in Bhujerba and Rabanastre for 1,400 gil.

In the Zodiac versions, it now provides 31 Attack, 5 Evade, 21 CT, 12% combo rate, has a 5% chance of inflicting KO on a target, and requires the Daggers 2 license for 20 LP. It can be bought in Rabanastre, Bhujerba, and Dreadnought Leviathan for 1,920 gil, found as a treasure in the Lhusu Mines (Site 2) and stolen from Tiamat in Trial Mode Stage 13. It can be equipped by the Shikari class.

If Ignis has the Assassin's Daggers equipped, he can inflict enemies with Poison with his Analyze skill.

The Assassin's Dagger costs 5,000 gil, and instead of causing instant death, like its former appearances, it causes the Doom status. It has 7 Attack and 5% Defense.

The Assassin's Daggers are the second strongest weapon for Rem. They provide 59 Attack Power and have a 10% chance of inflicting Instant Death. They can be bought at the shop in the Armory for 60,000 gil after clearing United Front mission on Finis difficulty. In the PSP version, they can also be obtained by exchanging for 10 tickets on the Square Enix Members site.

Assassin Dagger is a level 45 dagger that provides +38 Attack and is bought for 680 gil.

This section about equipment in Final Fantasy Crystal Chronicles: My Life as a Darklord is empty or needs to be expanded. You can help the Final Fantasy Wiki by expanding it.

The Assassin's Dagger is a level 64 dagger that adds 43 to Attack and increases the EX Gauge by 20% at the start of the battle. It can be obtained by trading 19,610 gil, a Main Gauche, Mammoth Tusk x3, and Transmogridust x4.

The Assassin's Dagger is one of Locke's alternate weapons, and comes included with the Locke Cole Start Pack DLC from the PlayStation store. Like all other characters' weapons, equipping it offers no advantages or disadvantages.

The name says it all. Killing monsters isn't assassination, but who's counting?

Assassin's Dagger grants +5 to Attack. It can be equipped by Thief, Dancer, Locke, and Rinoa.

An enchanted dagger used by those in the business of taking lives. It can inflict instant death.

One of the twelve shining arms capable of cutting through to one's very soul. This cursed dagger is said to easily reap the life of those targeted by any skilled assassin wielding this dagger, but soon that very same assassin is said to face an inescapable horrible death. Only those who have shown their might to The Peaceful Mage of Purity, Vindemiatrix, can wield this dagger.

Assassin Dagger is a Dagger obtained by completing the Vindemiatrix fight in the Chamber of Arms. It provides 116 ATK, has a 5% chance to inflict any status ailment, has a 60% chance to counter physicals with a normal attack 3 times per turn, and enables access to the ability Life Taker.

A swift knife for assassins.

The Assassin Dagger appears as a knife within the Forsaken Dungeon. It provides 39 Weapon Atk, 7 Durability, +3 Magic Attack, +1 Speed, and -1 Consumption Rate.

The Deathstroke is the ultimate weapon for Hawkeye should he take the Dark-most class of the Ninja, the Nightblade, a Thief class that has taken the arts of the ninja into a renegade path of a professional killer. It is an elongated jet black miserecorde like dagger, with tarnished brass mouthpieces, a fleshy leather-like material for its handle, and another smaller blade at its pommel. It is a dagger made of materials that when exposed to darkness, completely absorbs all light and blends into shade, hiding its presence completely. Its lethality is further realized through its blade design, allowing it to cut and pierce into its victims without effort, making it perfect for assassinations.

Five centuries after the Crystal Orthodoxy was founded, assassins targeted many of its high officials. This dagger, favored by an assassin who was captured and executed by the High Inquisitor of the time, is revered by the shadowy ones as the Orthodoxy's bane.

In Bravely Default, Assassin Dagger is a dagger that provides 29 P.ATK, 95 Aim, 3 Critical, and has a 25% chance to cause Death. It can be bought in Eternia for 10000 pg, or found in Eternian Central Command.

In Bravely Second: End Layer, Assassin Dagger is a dagger that provides 31 P.ATK, 95 Aim, 3 Critical, and deals 50% more damage to beasts. It can be bought in Grandship for 7000 pg.

Final Fantasy Crystal Chronicles: My Life as a Darklord. 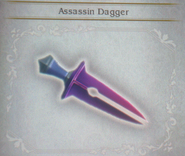 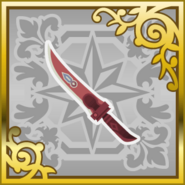 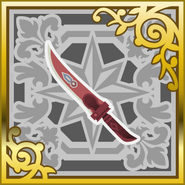 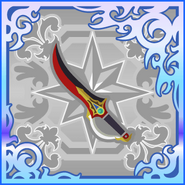 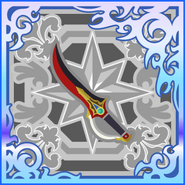 The meaning of the word Assassins is a secret order of Nizari Ismailis, particularly those of Persia and Syria, that formed in the late 11th century. Mentions of Assassins were preserved within European sources where they are depicted as trained killers, responsible for the systematic elimination of opposing figures.