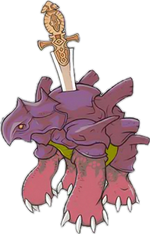 Aspidochelon appears as an enemy at Ebot's Rock. If it is not defeated in five turns, it will attack with Rage. It can also counter magic attacks with Wind Slash.

Aspidochelone is a Notorious Monster member of the Adamantoise family. It is weak to Ice. When it is defeated the player earns the title: Aspidochelone Sinker. It spawns in the Valley of Sorrows.

The Aspidochelon appears as a Trophy Rare Game enemy in Cerobi Steppe. After the player has begun the Rare Game sidequest, it has a 40% of spawning in the Feddik River area. The rare item Scarletite can be stolen from it.

The Aspidochelon appears as a Rank II Non-Elemental Melee Yahri. It is found as part of a side mission in Gugoza Falls, as the party seek to obtain the sword embedded in its back. The Aspidochelon will not actively seek to attack the party and will instead rely on other enemies to protect it. It has high defense that it can increase further using the Shelter ability.

The adamantoise Aspidochelone is the boss of the level 46 FATE "Bigger than Life," found in the Zanr'ak area of Southern Thanalan. The flavor text for the FATE notes that it takes four score summers (80 years) for an adamantoise to reach full size, which Aspidochelone eclipses, and wonders at how long it took for it to reach its colossal size, or how much it had to consume.

Aspidochelon appears during the Starving Beast Seeks Food Hunt and is found in Old Lestallum. It is a level 62 enemy with high HP and Strength. 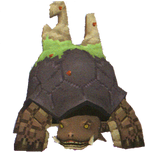 The Aspidochelon is an enemy found outside of Liberte, inside the Pirate Hideout, and in the Moonsand Ruins. It can make itself immune to physical attacks with the Unbreakable ability.

[view · edit · purge]According to the tradition of the Physiologus and medieval bestiaries, the aspidochelone is a fabled sea creature, variously described as a large whale or vast sea turtle, and a giant sea monster with huge spines on the ridge of its back.