Asmodeus (The 4 Heroes of Light)

Boss
Asmodeus is a minor antagonist in Final Fantasy: The 4 Heroes of Light.

Before the events of the game, Asmodeus wiped out nearly all of the Moon Folk in their battle to seal him. Asmodeus arrived in the Kingdom of Guera and disguised himself as the King. He sent Krinjh, the last of the Moon Folk, to bring a Great Tree Seedling from Arbor ostensibly to make Guera a fertile land.

After Krinjh returned with the seedling and his elf lover Ariadne, Asmodeus ordered him to the Moonlight Tower and attempted to murder him with a horde of monsters. Krinjh barely survived, and Asmodeus took Ariadne to the Quicksand Castle to turn her against Krinjh and corrupt the seedling. Ariadne became the Sand Devil and trapped the people of Guera in their city. Asmodeus then banned the use of water magic, as water was her weakness in that form.

Fifteen years later, the party meets Asmodeus as King Guera after Krinjh leads them to Guera. Brandt and Yunita ask for King Guera's help to save Horne, and he agrees in exchange for defeating the Sand Devil. They succeed, and both Ariadne and Krinjh disappear into moonlight. On their return, Asmodeus shuts himself away rather than adhering to the deal. Brandt and then Yunita leave to pursue other avenues of aid.

After being sent decades into the past, the party arrives at Guera during Asmodeus's corruption of the seedling. They help Krinjh fight the monsters at the Moonlight Tower and then rush to the Quicksand Castle to interrupt Asmodeus' lies to Ariadne. Asmodeus attacks them, but they use the Merkmal to expose his true form and defeat him. With Asmodeus destroyed, Krinjh and Ariadne become the King and Queen of Guera and lead the nation to peace. Later, Asmodeus is revived within the Star Chamber, but he is defeated once more.

Asmodeus is fought three times, once as King Guera, and as Asmodeus himself in Quicksand Castle, and a third time in the Star Chamber.

In Bravely Default, Asmodeus appears as a level 70 Nemesis in Norende.

In Bravely Second: End Layer, Asmodeus appears as an optional boss fought southeast of Yulyana Woods Needleworks as part of the Seven Sins sidequest and represents the sin of Lust. It gives access the Yōkai to the Diabolism spells Lust and Thundaja. 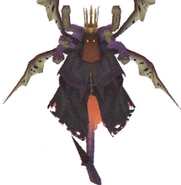 Asmodeus, as King Guera, speaking with Krinjh by Akihiko Yoshida.