Don't be fooled by his composed demeanor--Asmodai is a vicious villain who has long abandoned mercy and compassion. Subterfuge and espionage are his weapons of choice, but when forced into direct combat, he commands powerful miasmas drawn forth from the earth that rots whatever he treads.

Asmodai is one of the Four Generals in Final Fantasy Dimensions and represents the element of earth.

In his true form, Asmodai is an old man with pale-blond hair and a wrinkled face. He wears a yellow robe with patterns on the bottom, and in battle mode he holds a staff.

Asmodai has a cold, manipulative personality. He is arrogant, as shown both times when he believes himself invincible because of a new trick he has up his sleeve.

Asmodai posed as the king of Alfheim, but his identity is revealed atop Yggdrasil as the Crystal radiates. He reveals he threatened King Freyr to give up his sight and memory in exchange for the life of his wife and son. Freyr tries to stop Asmodai from getting hold of the Crystal, but is defeated. He stands up once more, and renders Asmodai's invincibility useless, allowing the party to attack him. After being defeated, Asmodai flees.

Asmodai reveals himself once more in the Desert Moon base. It is revealed that he and Matoya were once lovers and he lets know the Emperor cannot age. The party engages him in battle and defeats him.

Asmodai, along with the other generals, is revived as a mindless creature by the Avalonian Empire to obtain the Dark Matter. He is stopped by the Warriors of Light and Warriors of Darkness and defeated once more. 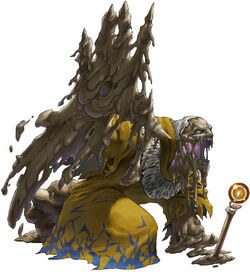 Asmodai appears as a earth-elemental summon. His special attack is Otherwordly Miasma, which deals earth-elemental damage to all enemies and decreases their speed for three turns.

Asomdai allows the wielder to use the following abilities: 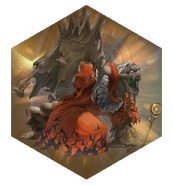 Asmodai appears on a card that depicts his official artwork and is earth-elemental.

Asmodai is an alternate spelling of Asmodeus. [view · edit · purge]Asmodeus is a king of demons known from the deutero-canonical Book of Tobit, in which he is the primary antagonist. The demon is also mentioned in some Talmudic legends. He was supposed by some Renaissance Christians to be the King of the Nine Hells. Asmodeus is referred to as one of the seven princes of Hell, and in Binsfeld's classification of demons, each prince represents one of the seven deadly sins. Asmodeus is the demon of lust.