Ashe was set to appear. Two outfits were designed for her, and are less revealing variants of her original Final Fantasy XII outfit. Since she wears in a headdress similar to the one worn by King Raminas in one of the two designs, Ashe was likely to be a slightly older queen at this point in Ivalice history.

Ashe was to be a major character where an ancient sea king who would try to take over Ivalice once every 10,000 years would have targeted her for the deeds of her ancestors who had slain the sea king during his last crusade. Seeking revenge, the resurrected king would have sent his marine armies to invade the lands with only the magickal fortress standing in their way with Basch, as the main character, leading the defense of the fortress. Ashe, now an experienced queen many years unto her reign, would have been one of the first allies to help him on his quest. There was planned to be a romance between the two at the beginning, but it was planned to deteriorate with the two drifting apart and Ashe falling in love with Larsa instead.[1]

Ashe and Rasler were part of the backstory of Dalmasca, which fell 30 years ago to the Garlean Empire. The two were twins in the royal family but both ended up dead. A side conversation reveals that there is someone claiming to be Ashe leading a rebellion based out of the tunnels beneath the fallen city, but is unlikely to be her as not only was her death confirmed by Ba'Gamnan, who was a Fusileer assigned to protect her, but the fact she would be over 50 years old by current events.

Ashe appears as a playable character.

The former princess of the kingdom of Dalmasca and the only living heir to its throne. Her strong will and drive for justice have made her hard and unwilling to bend. Having lost both her husband Rasler and her father in the war, she retreats underground Rabanastre and forms the Resistance. It is in the city's sewers that she will meet and ally herself with Vaan and the others.

Ashe appears as an unlockable character, and is obtained by collecting Scarlet Crystal Shards.

Ashe's skillset resembles that of the Red Mage; she has good magic for offense, defense, and recovery, as well as further increasing her own agility. Players must choose what direction to take Ashe towards, thanks to her versatile abilities.

For revenge against the empire which took both father and husband from her, Princess Ashelia discards her name and station to seek what she believes to be justice. But is this revenge truly what she has thirsted for?

Ashe is a playable character and can be unlocked by collecting Orange Crystal Shards.

Ashe appears as a playable character.

This Dalmascan princess is working overtime in the Resistance to retake her kingdom.

Ashe is an exclusive character only available from the Premium Character Shop as a random downloadable content. She uses the Northswain's Glow ability during battle.

Ashe appears as a playable character who could be recruited during the Challenge Event Kingdom Reborn - The Blood Royal as the First Time Reward for completing the event's Leviathan Interior stage on the Classic difficulty. 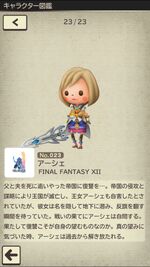 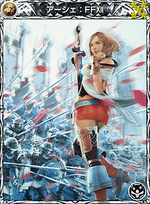 Ashe appears in Dragon Quest & Final Fantasy in Itadaki Street Special, which was released before Final Fantasy XII, alongside Vaan.