Ascalon (アスカロン, Asukaron?) is a recurring weapon in the series.

Ascalon is a weapon for Tidus, obtainable if the dominant ability on any sword is Double AP.

Ascalon is a great sword that provides 76 damage, 458 delay, STR +3, VIT +3, MND +3, with additional Light damage against dragons and Procs 100% effects. It deals 9.96 damage per second and accumulates 119 TP per hit. It can be equipped by level 68 Warrior, Paladin, Dark Knight, and Rune Fencer. It is dropped by Phanduron the Condemned.

Ascalon is a weapon of historical importance to the nation of Ishgard, being the sword of King Thordan I. When Archbishop Thordan VII becomes the primal King Thordan, he creates a massive aetheric replica of the weapon with one of the Eyes of Nidhogg embedded in the hilt, which dissipates once Estinien Wyrmblood removes the eye. Ascalon is not obtainable by players. 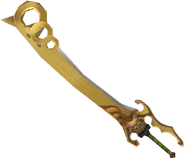 [view · edit · purge]The lance or in some versions of the story, a sword that Saint George used to slay the dragon, named after the city Ashkelon.