Artifact equipment is the job-specific equipment in Final Fantasy XI and Final Fantasy XIV obtained through a series of quests. Typically the armor sets are inspired by early-franchise depictions of traditional jobs, although many sets are of original design. The player community has adopted "AF" as the abbreviation for Artifact gear and its variants, a phrase that has carried over to Final Fantasy XIV. Though the higher-level sets are referred to by NPCs and the UI as "Relic" and "Empyrean" equipment, the players have taken to calling them "AF2 and 3" or "AFv2 and v3".

With the possibility in Final Fantasy XI to rapidly power-level a character through Abyssea, many players opt not to quest for Artifacts because they become obsolete relatively early. Similarly, Artifacts are often treated as a cosmetic/glamour item by players in Final Fantasy XIV due to how swiftly the Artifact tends to be replaced, though in this case there are no specific quests to perform beyond that of normal job-progression. Level 50 Artifacts can be entrusted to an NPC for storage in both games, allowing collectors to keep their inventory open. Level 60, 70 and 80 Artifacts may not be stored in a similar manner. 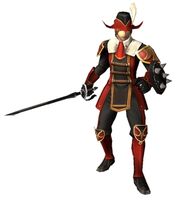 The Artifact equipment for any given job comes in five pieces—head, body, hands, legs and feet—and one other piece that varies with the job. The first quest usually rewards a level 41 weapon and is accessible at level 40. The next two quests are available at level 50 and each yield one more piece in the set. The remaining three pieces are involved in the "Borghertz's Hands" line of quests, requiring adventurers to seek out Treasure Coffers in various Rise of the Zilart dungeon areas.

There are also better versions of the Artifact equipment found in Dynamis and Abyssea. These are called Relic and Empyrean respectively.

The Artifact equipment is obtained through the jobs' respective quests, and its importance ranges from being something earned by new recruits through various trials, to being legendary relics that must be sought out. At level 45, players get to take the head, hand, leg and foot armor pieces throughout the quest. At level 50, the final class quest gives access to the class specific chest armor.

The Heavensward patch 3.05 introduced a new generation of Artifact armor at level 60, obtained with Allagan Tomestones of Esoterics or, changed in later patches, through completion of a job's level 60 quest and through trading Centurio Marks at the Forgotten Knight. This equipment is initially in an "Antiquated" state at item level 200, but can be upgraded to item level 210 with certain materials obtained through Alexander: Gordias (Savage). The set obtained through normal quests comes with a generic weapon, but the Artifact weapon may still be obtained through the Forgotten Knight by being purchased with Centurio Seals, or by obtaining it in normal quality from the expansion's relevant Anima Weapon questline. As of 5.3 however, completion of the Level 60 quest instead offers an updated coffer that contains the ilevel 210 gear. Players who completed the quests before the update who still have the antiquated version can trade them in for the upgraded version for 100 Poetics tomestones.

The new jobs added in Heavensward—Dark Knight, Astrologian and Machinist—do not have Level 50 Artifact or Vintage equipment, and instead obtain theirs at level 60.

Final Fantasy XIV: Stormblood has a third tier of Artifact armor themed around previous characters in the series (such as Black Mage's new Artifact being patterned after Vivi), or a different take on the original job than previously depicted by the game (such as Dragoon's new Artifact being patterned after a dragoon from Final Fantasy V). This tier of Artifact armor and its corresponding weapon is upgraded through Eureka Anemos by trading Eureka Crystals and Anemos Crystals, and must be brought from Antiquated to normal, then to +1, +2, and finally Anemos tier before it reaches its full strength and can be dyed.

The new jobs, Samurai and Red Mage, do not obtain Artifact armors at level 60 as the jobs introduced in Heavensward did, but do gain an equivalent to an Artifact set upon obtaining the job at level 50; Red Mages obtain a Red set of archetypal Red Mage's clothing, and Samurai obtain a Nameless set of a black, open-chested kimono and hakama. Neither job has an Artifact weapon at this tier, instead being given a normal base weapon. Both classes' Artifact sets are patterned after the equipment of each job's tutor and may be upgraded at Eureka Anemos, as with all other level 70 artifact armors and weapons.

In Final Fantasy XIV: Shadowbringers, acquisition of the fourth tier of artifact armor gained at Level 80 is integrated into the Main Scenario Quest as completing a Role Questline grants one of the Cardinal Virtues' broken Crystals, which is then taken to Grenoldt in the Tempest. As thanks for striking inspiration to construct items for the Ondo, he also offers the adventurer the level 80 Artifact gear and weapon of any class that reaches this cap. Rather than being coffer sets, they are selected piece by piece from a list and come in the form of weathered gear. Unlike previous Artifact sets, the player is not required to complete the corresponding specific job quest to unlock them.

The newly added Gunbreaker and Dancer jobs are given their own armor sets when unlocked at level 60. The Gunbreaker receives an Outsider set, consisting of an outfit loosely based on Squall Leonhart's outfit, and the Dancer receives the Softstepper set, being based on previous Dancer depictions. Similarly to the previous expansion's jobs, they lack an Artifact set at level 70.

In Final Fantasy XIV: Endwalker, the fifth tier of artifact armor is once again integrated into the Main Scenario Quest. After completing the quest A Bold Decision, Tataru Taru opens a shop in Old Sharlayan to better prepare the Warrior of Light for their journey to come. By speaking to the shopkeeper, Varsarudh, the player may obtain the individual pieces of gear. All jobs' artifact gear is available to take as soon as the shop opens. The artifact armor is level 90, but automatically syncs to level 89 if the player has not yet reached level 90 in that job. Additionally, while the armor is dyable, the ability to dye it is locked until the player completes the job's corresponding Role Quest.

The new Sage and Reaper jobs are given armor coffers containing the level 70 Bookwyrm's and Muzhik sets respectively, and are able to obtain level 80 Therapeutes's and Harvester's artifact gear from Grenoldt. Both of these sets are identical, with the Sage's gear being white scholarly attire, and the Reaper's gear being black, tattered mercenary outfits.