Abilities:
Rapid Banish (I-III)Passive:
Time from last to next action-28%

Artemis is a light-elemental Eidolon that appears in Final Fantasy Dimensions II. Her signet can be obtained for Aemo as a first-time completion reward for the "Earth Dragon’s Lair" side quest available during Chapter 1-3 of the "Crystal of Time" arc.

If obtained during Chapter 1-3, Artemis’s signet provides Aemo with a large boost for her HP, attack, and magic, but will provide her with a subpar speed boost. The signet’s Rapid Banish abilities are good for dealing single target light-elemental damage, but have heavier MP costs than the default Banish spells, and pales in comparison to later spells.

Artemis’s signet is viable for Aemo for more than half of the entirety of the "Crystal of Time" arc due to the signet's stronger stats. In addition, her Lunar Embrace attack deals light-elemental damage and prevents action for a single turn to all enemies. It also has the anti-giant trait, making the attack useful during the arc’s second and third chapters.

If the player manages to get more than one White Gem II, they can take advantage of the signet's fully maxed attack and magic stats, and its passive of decreasing the amount of time until Aemo's first turn by 28%. Despite being helpful during the "Crystal of Time" arc, Artemis's signet is ultimately replaceable when progressing through the "Eureka" arc.

According to the original Japanese free-to-play description, Artemis is based on the Moonmaiden (月の女神, Tsuki no Megami?, lit. Moon Goddess) enemy from Final Fantasy IV, which also dropped the Artemis Bow weapon. The summon is named Artemis after the moon goddess from Greek mythology.

Artemis’s artwork is based on the Moonmaiden’s sprite, being depicted as a female huntress wielding a sword and shield.

Her default artwork is directly based on the original sprites, donning purple armor. The final artwork has her in a more revealing darksteel armor, gaining a silver circlet headpiece and more elaborately designed weaponry.

Artemis’s summon attack is Lunar Embrace, which deals light-elemental damage and stop for a single turn to all enemies. The attack has the innate trait of dealing extra damage to giant-type enemies. Lastly, Lunar Embrace restores a moderate amount of HP to the player party. Summoning Artemis requires three bars from the Summon Gauge.

In the original free-to-play versions, Artemis was released during the game's time as Final Fantasy Legends: Toki no Suishō. Artemis's signet could only be obtained from the game's summon draw shop. Her signet taught the Moonlight I-III abilities instead, which dealt light-elemental damage and dispelled enemy buffs. She was an SS rank signet and could be equipped by all party members. 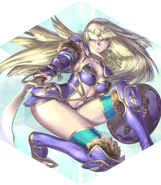 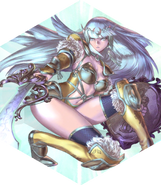 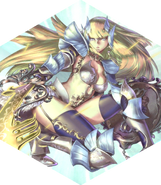 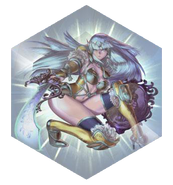 [view · edit · purge]Artemis is the Greek goddess of the moon who was often depicted as a huntress with a bow and arrows.