Artemicion (アルテミシオン, Arutemishion?) is a recurring moogle in the Final Fantasy series. He is identified by his striped purple fur, though the origin of these stripes often differ between being his natural fur color, to fur dyeing.

Artemicion is in charge of the Mognet mail delivery syndicate. He relies on Zidane and his friends to deliver mail after he uses Mognet Central's supply of Superslick to oil his fur, depleting it and causing the machinery to break down. Artemicion is one of the large cast of moogles. Though his presence is not a major plot point, it is a source of comic relief.

Artemicion is one of the Mognet administrators, and sends the player letters. In the original Dissidia Final Fantasy, the Moogle "Manager A" is a reference to Artemicion, and makes reference to using Superslick to keep his coat shiny and smooth.

Artemicion is a member of the Striped Brigands, a group of thieves mostly made up of Selkies.

Artemicion runs a shop in Rebena Te Ra that sells pocket and pouch upgrades for magicite, Potions and Ethers. In Story Mode, he also appears in a few dungeons accompanied by three moogles. These are dungeons the party can't exit, so Artemicion and the three moogles sell them items. At some point he resided in Rela Cyel before its destruction and knew Alhanalem.

When the party visit Rela Cyel Past, Artemicion and the three moogles steal items there before its destruction. He is sometimes gone from his shop and leaves it in the hands of other more lazy moogles. He eventually returns to run his shop in Multi-Player Mode.

When the character Gnash or any Selkie is equipped with the Creatures Head and the Creatures Suit, it resembles Artemicion. Gnash also makes several references to the Striped Brigands. 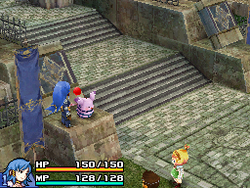 All you need to know about this town is that it's full of fashion crimes and its victims. But I'm here to stir things up and put some voom back in this city's vogue. Ah-ha! Here comes Fashion Disaster, Exhibit A. Whoa, what's with that haircut? Very, very dodgy. I'm a maestro with the scissors and curling iron. I can change your life-IF you're ready to be beautiful.

Artemicion appears in front of the library in Town, along with the Pavlov armor-clad Lilty, Elen Dok, that is his partner. He is a self-proclaimed fashion expert, and allows the player to change their hair color (unless s/he is a Yuke).

After defeating Larkeicus in the library, his location changes from outside the library, to on the roof of one of the stores in the town's main area. A citizen nearby suspects he moved because he was in the way at the library, and that he wouldn't get any complaints here, although it "isn't exactly the best place to do business".

Artemicion appears at Costa Faguita, sporting a Striped Apple design on his pom-pom, a reference to the Striped Brigands. Afterward, he can be found in various random locations and will drop gil if spoken to. He will ask the player not to tell anyone of his location, as he's a wanted criminal said to be linked with 188 crimes.

In Kingdom Hearts II, Artemicion isn't physically shown, but a moogle shop is named after him in Space Paranoids.

Gnash with the Creatures Head and Creatures Suit equipped.

[view · edit · purge]The word Artemision refers to Artemis, a word of unknown etymology, although various sources have been proposed. Artemis was venerated in Lydia as Artimus, therefore it was suggested that the "e/i" interchange points to a Pre-Greek origin.

Artemision is the Greek name for the Temple of Artemis.