The armorer's craft is an offshoot o' blacksmithin'. Time was when armorers an' smitties were one an' the same. But as the years trickled by, the techniques for workin' sheet metal into armor plates became a specialized trade.

The Armorer is a Disciple of the Hand in Final Fantasy XIV.

Armorers treat and work the malleable metals of Eorzea into all forms of armor. By binding together sheet, stud, and link, they are able to produce garb of plate and chain that has saved the lives of countless adventurers.
Though the armor trade once fell within the realm of blacksmithing, advancements in both metallurgical techniques and material refinement led to its necessary specialization, and it is now recognized as an official profession by all nations.

Armorers can create metallic armor to be worn by Gladiators, Marauders, and Lancers, as well as construct the alembics used by Alchemists and skillets used by Culinarians. They also can affix Materia to said equipment.

Being metallurgists, Armorers can also smelt the various ingots needed by Disciples of the Hand and hammer them into sheets.

Armorers use hammers as their primary tool and pliers as their secondary. Their armor is primarily made up of "Crafting" gear that they share with other disciples of the hand. Crafting gear provides bonuses to the craftsmanship, control, and CP attributes. Craftsmanship and control respectively improve their progress and quality gains when crafting. CP is the resource they use in place of MP for their abilities.

Soul of the Armorer is equipped.

Armorer appears with an earth-elemental card. 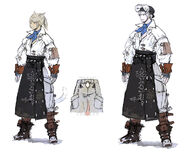 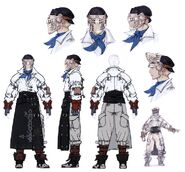