Armored Assassin is an enemy in Final Fantasy XV fought during the main quest Express Train for Trouble. It is a magitek trooper who fights with two swords.

Equipped with a blade in both hands, this cybersoldier has no need for firearms. It demonstrates a multitude of strengths in close-range combat and self-destructs when badly damaged. That said, the lack of firearms limits its versatility, and this model has thus only been deployed to a small number of units.

There are a couple Armored Assassins when Noctis and Prompto get off the train to protect it. They rush at the player and swing wildly with their swords, jumping and spinning their blades. Though only Noctis and Prompto are on the field, the player need not worry about Prompto or protect him, and just attack all enemies as fast as possible. If Prompto is fighting nearby linked attacks with him can trigger.

The player can warp-strike the assassins to quickly close the gap, deal damage and topple them over. Using the Cerberus gun (if available) in Wait Mode lets the player easily target the imperial units' heads to dispose of them in one hit. 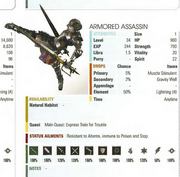 Retrieved from "https://finalfantasy.fandom.com/wiki/Armored_Assassin?oldid=3172391"
Community content is available under CC-BY-SA unless otherwise noted.