"A fiend whose tough carapace protects it from Normal Attacks but leaves it vulnerable to magic. It responds to magical attacks with Helm Counter."

Defense Up, Helm Counter
Nothing to learn

"A fiend whose tough carapace protects it from Normal Attacks but leaves it vulnerable to magic. It sometimes performs an irritating attack that destroys Ethers."

Defense Up, Helm Counter, Shatter Ether
Nothing to learn

I'm actually quite happy that I became a fiend. Do you find that odd? When I was human, life was just so difficult! Things are so much better for me now! I mean right now, I have freedom! It feels good to be alive!

Until recently, I had no memory of my human life. I'm sure it's because I didn't want to remember. There's a cave where fiends such as I work together to build new lives for ourselves. But one day, I suddenly remembered those terrible days of battle... the days when I was married!

I was once a sailor. I was wooed by my husband and moved from Besaid to Kilika. My husband was a good man, but he could never stand up to his mother. My mother-in-law considered me a rube, and she and my sister-in-law chided me in my husband's absence. Of course, I didn't just sit there and take it, though!

But those days of arguing would come to an end... when Sin attacked Kilika. But looking back, I'm glad I have those memories. It makes me grateful for what I have right now! Well then, I suppose I should be getting back to the others.

Armet was created from the soul of a Besaidian woman who married into a Kilikan family prior to her death during Sin's attack on Kilika and found happiness as a fiend. However, Armet learns her that both her mother-in-law and her sister-law who tormented her in life have become a Bully Cap and Flan Amarillo respectively as their conflict in life continues in death. 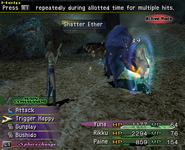 [view · edit · purge]The armet is a type of helmet which was developed in the 15th century.