A warrior sworn to the service of the gods, using the Sword Spirit ability to release a wave of spiritual power.

Ark Knight, also known as Arc Knight, is an enemy job in Final Fantasy Tactics that focuses on destroying opponent's morale, either by destroying statistics, equipment, or turning units against themselves.

The job is used by Elmdore and Zalbaag. While their action abilities differ, they both have Vampire in their second slot. Zalbaag's job has entirely different reaction and support abilities compared to all the "basic" jobs. He can never learn Equip Axes, Beastmaster, Defend, and JP Boost, because those were replaced with Counter, Concentration, Safeguard, and Swiftness.

There is also a version of Delita as an Ark Knight, accessed via Gameshark, that possesses the action abilities of the Divine Knight.

A warrior sworn to the service of the gods, using its Blade of Ruin to rend both body and soul.

A warrior sworn to the service of the gods, rending enemies and their items with its Unyielding Blade.

Zalbaag must be equipped with a sword to use these abilities.

The success rate for Blade of Ruin abilities are as follows:

In The War of the Lions, Unyielding Blade abilities will now damage monsters and humans without equipment, but will still fail on a unit with Safeguard.

Delita must be equipped with a sword to use these abilities.

The damage inflicted by Unyielding Blade is as follows: 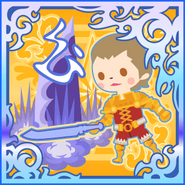 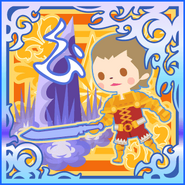 Crush Weapon (SSR+).
Add a photo to this gallery 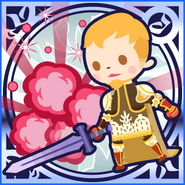 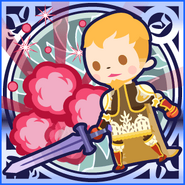 Powersap (SSR+).
Add a photo to this gallery

Mindsap.
Add a photo to this gallery