Ark Blast is a Concurrence used if the player inputs two of each level of Quickenings. It deals damage to all enemies with a power of 205.

Ark Blast is one of the results of Gabranth's EX Burst, used if at least the first two abilities of his EX Burst were used correctly but the last was not input in time.

Ark Blast is Vaan's Burst Soul Break learned through the Orichalcum Dirk(XII). It instantly deals five ranged non-elemental attacks to one target and temporarily reduce their Magic and Defense by 40%, as well as granting Haste and Burst Mode. It is highly coveted as one of the most valuable Soul Breaks in the game.

As any Burst Soul Break, Ark Blast changes the Attack and Defend commands for Addle and Expose respectively:

Both commands, Addle and Expose are classified as Support abilities and both have reduced delay before hitting.

Ark blast requires one Soul Gauge to cast and requires 30'000 AP to master. 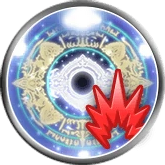