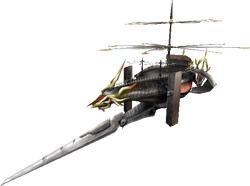 Ark (アーク, Āku?) is a recurring airship-like summon in the series that first appeared in Final Fantasy IX. Although initially appearing as an airship with a dragon's head at the helm and a long blade out front, Ark can transform into a mecha; in this state, it can attack with an arsenal of explosive laser weaponry.

Ark is Dagger's ultimate eidolon, learned from equipping a Pumice for 100 AP. It costs 80 MP to summon. The party can locate two Pumice Pieces, which can be forged into Pumice by Hades at his Synthesis Shop in Memoria. Pumice can also be received by beating Ozma, the most powerful enemy.

Ark was first met when fought as a boss in Oeilvert.

When summoned, Ark departs from the red moon of Terra, and transforms into a mecha as it reaches terminal velocity within Gaia's orbit. A hovering Ark targets the enemy with a laser glyph before firing a salvo of explosive lasers from its wings to scorch the battlefield, and finishes by readying a larger laser whose impact can be seen from space. Its attack is called Eternal Darkness (暗黒の運命, Ankoku no Unmei?, lit. Dark Fate), which deals Shadow-elemental damage to all enemies.

Ark's spell power is equal to 106 plus the total number of Lapis Lazulis in the party's inventory. (See here for damage formulae.) It also has an eidolon-type Tetra Master card.

The Cruise Chaser (クルーズチェイサー, Kurūzu Cheisā?) has elements in common with Ark, but is more likely based on the 1986 Square game Cruise Chaser Blassty designed by Hironobu Sakaguchi and Kazuhiko Aoki. The Cruise Chaser is a boss in Alexander - The Heart of the Creator. Like Ark, Cruise Chaser has its default mecha form, and transforms into its airship form during the fight's phase transition.

Ark and its ability, Eternal Darkness, are Garnet's LD Ability. Mastering its passive grants Garnet up to 3 uses of an HP+BRV battery attack that strikes all foes and grants up to 12 turns of an overhead buff that allows Ark to recast every 4 party member turns, with moderate HP recovery after each casting. It deals extra damage to foes afflicted with Thunder Resist Down and Water Resist Down.

Ark is a light-elemental Eidolon for Jornee and Aemo. Jornee's version of the signet teaches her Aura abilities, while Aemo's version teaches her Blasty abilities. Both artworks of the summon take inspiration from the summon's multiple appearances in the series.

Ark is a dangerous foe that rains down punishing physical attacks, but you can brace yourself for battle using Protect, kupo! Its Photon attack deals massive damage to an ally based on their HP, so having a healer in the party helps. Wind is its weakness, and Aero Strike can really hurt it bad! It's immune to earth, though, kupo.

Ark also appears in various Final Fantasy IX event dungeons. The versions of Ark encountered in the non-ultimate difficulty dungeons of events use the same attacks as the realm dungeon versions. The "ultimate" versions of Ark often use stronger variants of its normal attacks and occasionally have access to the Eternal Darkness attack. 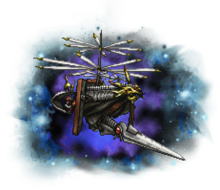 A stronger version of Ark also appears as a boss and an Esper as part of the magicite system. The summon is a rank 5 dark-elemental magicite and players must first defeat Ark (Savage) in the third dark magicite dungeon in order to obtain it. This version of Ark uses a different set of attacks to match its dark-elemental nature, such as Endark, Eternal Darkness, and Doomsday.

Ark also has a chance of using the following abilities after being summoned into battle: 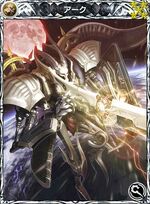 A mechanical entity fusing magic and technology, once sealed beyond timespace by a heavenly pact.

Ark is an earth-elemental magic card, allowing the player to use the Stonera earth magic ability.

The card was originally added into the game's draw shop in late 2016, however it has since been removed as a obtainable card through this method. The only method of aquiring this card is now through the game's ability shop.

Ark appears in Final Fantasy Trading Card Game with a dark-elemental card depicting an artwork of it. 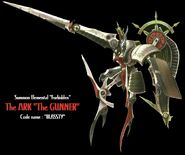 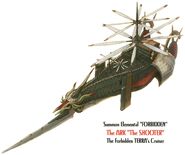 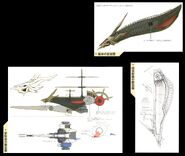 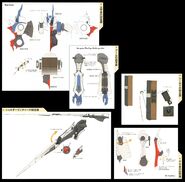 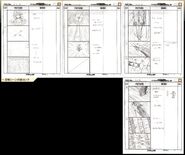 The Pumice item used to summon Ark in Final Fantasy IX has the same Japanese name as Final Fantasy's Levistone (ふゆう石, Fuyuuishi?, lit. floating stone), which is used to raise the ancient airship from the Ryukahn Desert.

Ark's design is based on the eponymous robot from Cruise Chaser Blassty, a 1986 RPG developed by Square with anime studio Sunrise.