Bosses and Last Ones can be re-fought in the Ark

The area known only as "The Ark" lies at the core of New Cocoon, built by Hope in times past.
Hope guides Lightning in her endeavors from this space, within which time has ceased to pass.

The Ark is a location in Lightning Returns: Final Fantasy XIII. It is a floating command center built by Hope Estheim inside Bhunivelze, his "new Cocoon". It is a timeless zone where Lightning can rest and interact with Hope. The location is key in prolonging the life of the world: inside the Ark is Yggdrasil, the "holy tree of life", and completing quests in Nova Chrysalia strengthens the tree, enabling it to prolong the life of the world.

Lightning returns to the Ark every day at 6 AM to rest, talk to Hope, give Eradia to Yggdrasil, and restock her items.

An object within the Ark called the 'Book of Conquests' records Battle Scores from bosses and Last Ones. It allows the player to challenge defeated enemies in their most powerful forms. These battles offer no rewards and are purely for sport and practice.

In New Game+, a blue hourglass, the Crystal of Atonement, appears in the Ark from the second day onward. Examining the hourglass and confirming the player's choice twice suspends their current progression and rewinds time to the first day, keeping equipment, stats and certain items, but sacrificing memories of all quests completed, functioning as a New Game++.

Following the creation of Nova Chrysalia, the planetoid Bhunivelze remained afloat in the planet's atmosphere, gaining a ring, with the Ark being an area within it. 169 years ago the god Bhunivelze took Hope Estheim, regressed his body to when he was 14 years old, and used him as a vessel. He then implanted "Hope" within the Ark where time doesn't flow.

In Final Fantasy XIII: Reminiscence -tracer of memories- it is revealed Antimatter Manipulation Principle technology can control Chaos, but research into this use was never completed as the researchers disappeared one by one. Though not directly stated, it may be that the Ark was where the research took place, and that it uses AMP technology to control Chaos and halt the flow of time.

Upon awakening from her crystal slumber and failing to apprehend Snow Villiers in Yusnaan, Lightning is teleported back up to the Ark where Hope introduces her to the world and her role as its savior. After talking with Hope she is teleported down to Luxerion. Hope keeps in contact with her from the Ark via a wireless communicator, analyzing the Chaos around her to guide her. At the end of each day he summons Lightning back to the Ark to yield the Eradia she has collected from saved souls to the Yggdrasil.

Periodically, Lightning encounters visions of Serah Farron in the Ark, reminding her of what her reward will be should she be successful in saving souls, though she doesn't feel the connection with Serah that she had expected. Sometimes when Lightning is teleporting in or out of the Ark she is taken to a place said to reside inside her heart where she can talk to Lumina without Hope overhearing them. On the eleventh day she meets the representative of the souls residing in Chaos that takes the form of Cid Raines, and learns that contrary to what Bhunivelze and the Order of Salvation preach, the dead can yet be saved.

If Lightning saves enough souls the Yggdrasil blooms a final time and grants the world one more day in the form of the lost hours being returned to the world.

On the final day, Lightning discovers the truth about Hope, realizing his soul wasn't entirely in his body, and that the Hope she was relaying with was partially under Bhunivelze's control to monitor her. When she returns to the Ark, Mog greets her instead of Hope, and offers to help her with the final battle by selling her items. Lightning travels to the Luxerion Cathedral where she stops Vanille from performing the Soulsong that would destroy the souls of the dead. Revealing to Vanille she has the power to save the dead, Vanille and her friend Fang guide the souls to the Ark so they can travel to the New World as the old world is destroyed.

Lightning fights Bhunivelze to free mankind from the gods' influence and Nova Chrysalia is destroyed, the Ark included. The souls of mankind, both living and dead, travel to a new world where life begins anew.

The Ark is a large circular area contained within the artificial moon of Bhunivelze, which has a circular hole with a view of the sky, similar to Cocoon, after which it is shaped. Hope uses his computer within the Ark to monitor Nova Chrysalia, the Chaos, and most importantly, Lightning. The top of Hope's computer resembles Etro's gate, a recurring motif in the trilogy. Yggdrasil, the tree of life, lies beyond the circular platform.

Every day at least one new treasure chest appears in the Ark, depending on the day and the playthrough.

The Ark is the only place where EP can be exchanged for items.

"The Ark" is the sixth track on the first disc of the original soundtrack and acts as the location theme for the Ark. The track contains soft, angelic, lullaby-fashion vocals, alluding to the rest the area serves as and its connection to God. "Meeting You", the twenty-second track on the third disc, contains elements of "The Ark", and replaces the vocals with a soft violin tone. The track is also featured in the final boss theme, "Almighty Bhunivelze", and in the game's ending theme.

"The Ark (Soundtrack Exclusive Ver.)" is an arrangement of "The Ark" exclusive to the PLUS version of the soundtrack that prominently features a ticking clock, an allusion to the game's time mechanic.

The exterior of the Ark appears as a part of the background element of the Field Music Sequence "The Dead Dunes" for Lightning Returns: Final Fantasy XIII. 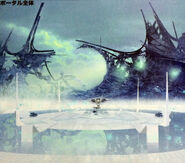 Artwork of the Ark.

The logo seen in the location trailer.

The teleporter within the Ark that returns Lightning to Nova Chrysalia.

Lightning retrying a battle within the Ark.

[view · edit · purge]In the Bible, Noah carried seven pairs of each clean animal species and one pair of each unclean animal species, each pair a male and female, into a giant ship called the Ark. The Ark was built by God's command to survive the deluge He sent to purge the world from the sins committed by mankind. Similarly, the Ark guards Lightning from the flow of time and the world's coming destruction.

Within Final Fantasy XIII and Final Fantasy XIII-2, the Arks are said to contain hordes of beasts to act as training grounds for l'Cie. They are rumored to have been created to store weapons for Bhunivelze's battle with his mother, Mwynn, likely alluding to how Lightning and Hope are also, in a way, his "weapons".