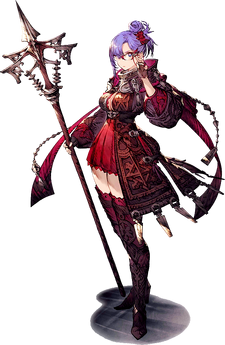 The Arithmetician (算術士, Sanjutsushi?), also known as Calculator, is a recurring job in the series, often appearing in the tactical role-playing titles. It uses a combination of mathematics and magics to deal damage to enemies and support their allies.

Arithmeticians are a unique spell casting job, having access to abilities that use mathematics in combination to their spell casting. Similar to recurring Blue Magics, such as Level 5 Death and Level 3 Flare, Arithmeticians use level and height multiples as conditions when selecting spells to target enemies.

Like other mage jobs, Arithmeticians sport higher magic oriented stats, while also making use of light armor. Their primary weapons are rods and tomes.

The Arithmetician, previously known as Calculator, is a high-level magick class unlocked by reaching job level 5 on the White Mage and Black Mage, and job level 4 on the Mystic and Time Mage. The job's Arithmeticks command allows the user to cast most magicks for free and without a Charge Time, provided if the user knows the spell and can do the right calculations for it.

Male and female Arithmeticians appears as Memoria jobs to unlock, with their appearances being based on the Final Fantasy Tactics designs. It can be obtained as soon as reaching rank I on the Black Mage job. Once it reaches job level 3, the job learns its Arithmeticks special ability, which raises the BREAK gauge faster when attacking in the order of a puzzle row.

In the original release of Pictlogica Final Fantasy, Arithmeticians could only be obtained through mining.

The Arithmetician appears as the unique job of Ildyra and the Halloween version of Little Leela. The job gives a character access to the Arithmetician command set, having access to variants of spells that use level, CT, and height in the calculation of the amount of damage dealt to the targets.

Characters with access to the Arithmetician as a secondary job include the Black-Robed Witch version of Helena Leonis, Iivialle and Mariale.

Several titles have featured elements that serve as references to the Arithmetician job.

The Construct 7 boss inside the Ridorana Lighthouse dungeon from the Return to Ivalice raid series enters a state called Computation Mode (算術チップ, Sanjutsu Chippu?, lit. Arithmetic Chip) during the encounter. The skills used in Computation Mode; Divide by Three, Divide by Four, or Indivisible, reference the Arithmetician's skillset from Final Fantasy Tactics, having the player make sure their hp is dividable by a certain number to avoid taking damage.

Arithmetician appears as a card in the Ivalice Special Arena has a limited-time special arena with eighteen floors. Generic Arithmetician also appears on a gold card.

[view · edit · purge]Arithmetic or arithmetics (from Greek arithmos) is the oldest and most elementary branch of mathematics used for tasks ranging from simple day-to-day counting to advanced science and business calculations. It involves the study of quantity, especially as the result of operations that combine numbers.