You shall be restored.

Arise (アレイズ, Areizu?, lit. Araise), also known as Life2, Life 2, Raise 2, Full-Life, or Araise, is a recurring White Magic spell and the upgrade to Raise. It resurrects a KO'd ally to full HP. It can also destroy undead monsters in some games. Its upgrade is Reraise.

Full-Life (LIF2 on the NES and Life2 in Final Fantasy Origins) is a level 8 White Magic spell that revives a unit from KO and fully restores their HP.

The spell can be bought at Lufenia and can only be learned by the White Wizard job class. In the Dawn of Souls and 20th Anniversary Edition releases, it costs 40 MP to cast.

Arise (also called Life2) is a White Magic Level 8 spell that can be used only by a Devout, a Sage, or an Onion Knight. This spell can be bought in Eureka for 60,000 gil.

Revives and restores full HP to a single target.

Arise (also called Life2 or Full-Life and Raise 2 in Easy Type) is a White Magic spell used by Rosa (level 55), Porom, Fusoya (default), Tellah (after Cecil becomes a Paladin in 3D versions). It has a casting time of 2. It costs 52 MP in 2D versions (70 MP in 3D versions).

Arise is a White Magic spell learned by Rosa (level 45) and Porom (level 56). It revives one KO'd ally in full HP and costs 52 MP to cast.

Arise is a Level 6 White Magic spell and costs 50 MP to cast. This spell can only be bought in Phantom Village for 10,000 gil. Purobolos, along with Hellraiser, are the only enemies to use this spell. Arise is one of the spells that can be cast from the Wonder Wand for free.

Arise (also called Life 2) is a Healing spell that is learned from the esper Phoenix at a rate of x2. It is also learned by Terra (level 49). It costs 60 MP to cast and is vulnerable to Runic. Arise can be cast by Curlax, Magic Urn, and Lady.

Life2 is the second level of the Revive Materia. It costs 100 MP to use and 45,000 AP learn. It instantly kills undead enemies, and never misses on them, unlike Life.

When Sephiroth is a guest party member during Cloud's Nibelheim flashback and Cloud falls in battle, Sephiroth will revive him with Life2.

Arise is the final ability of

Revival Materia, costing 14 MP to cast. It cures one ally of KO status and restores all HP.

Full-life revives one character from KO and restores their HP to full. It is a rare spell only drawn from bosses and from rare draw points, and refined from few items. Full-life is the second-best spell to junction onto HP-J, Vit-J, and Spr-J.

Full-Life is a White Magic spell Eiko and Beatrix can use. Eiko learns it from the Siren's Flute and Light Robe for 90 AP and costs 24 MP to cast. It restores a KO'd ally back in perfect health. Instantly defeats the undead.

Full-Life is a spell located on Rikku's section of the standard Sphere Grid, and is the final unobstructed ability on Yuna's expert Sphere Grid. It revives one party member from the dead with full HP. It costs 60 MP to cast.

Full-Life is a White Magic spell used by the White Mage dressphere. It costs 160 AP to learn and costs 60 MP to cast. It also can be used on the Immortal Soul Garment Grid after going through all the nodes.

Full-Life can be cast by Angra Mainyu, Left Redoubt, Right Redoubt, and Vegnagun's Core and Torso.

Arise is a spell learned by the White Mage job at level 99. The spell functions similar to Raise, except that the target of the spell is weakened for only 3 minutes instead of the usual 5, has a Reraise effect bestowed on them upon accepting the Raise, and finally is restored to 100% of their (weakened) maximum HP. Both the raise and re-raise effects of the spell restore 90% of exp lost upon death.

Arise is one of the most difficult spells to obtain, its scroll being only dropped off of Provenance Watcher and the very highest tier of foes in Legion: Paramount Botulus and Paramount Gallu.

Arise is a White Magicks spell that revives an ally in full health, and may restore more than 9,999 HP when cast, as the game has an invisible Break HP Limit. When cast on the undead, Arise has a 35% chance of inflicting instant death, which, surprisingly, is lower than that of regular Raise (70%).

In the Zodiac versions, Arise is a White Magick 10 license only the White Mage and Monk can learn. Reddas has it by default.

Arise is a spell cast by Eidolons when their summoner's HP reaches zero, or when the Eidolon's SP reaches zero and the summoner's Gestalt gauge is depleted. It revives the party leader, fully restores HP, and removes negative status effects, but the Eidolon will be dismissed.

Arise appears as an EP ability that revives Lightning to full health after being defeated in battle and costs 2 EP (easy mode) or 3 EP (normal/hard mode) to use. It can still be cast when the current EP is already fewer than the EP required, even 0.1 EP, but the health will be restored according to the EP used.

White Magick to fetch a warrior from the brink of death and fully restore HP as well.

Spirits of life, give a new life to the soul! Raise2!

Arise (Raise2 on the PS) is learned by the White Mage. It costs 600 JP to learn. It costs 20 MP to use and has a speed of 10. If used on undead units, it will instantly KO them if it hits.

Full-Life is learned by White Mages. It is acquired through the Nirvana Staff for 300 AP. It costs 20 MP to cast, has a Magic Power of 100, and has a range of 4. It fully revives one KO'd unit, or inflicts Instant Death to an undead unit. It is stealable through Steal: Ability.

Arise is learned by the White Mage from the Nirvana Staff. It costs 400 AP to learn.

Full Life is the result of a spell fusion. It requires 2 players to concentrate on the same target when casting Life. It fully revives a KO'd party member. It can only be used in Multiplayer.

Arise revives a KO'd ally to life with full HP and 50% SP. It can be cast by piling two Raise spells.

Arise revives a KO'd ally to life with full HP and 50% SP. It is cast by stacking two Raise spells.

Arise appears a White Magic spell and costs 4 AP to cast. The spell can be given to any character by having an Arise Tome in the character's inventory. The spell can be purchased only in Urbeth after darkness floods the world for 5,000 gil.

The Seamstress's third ability, Refurbish, works the same as the Arise spell.

Araise is a level 8 white magic spell, it costs 54 MP and can be acquired at Level 20 Seer.

Arise is a spell selectable during Onion Knight's Spellbook EX Burst, but it does nothing.

Fully revive all KO'd allies in the same area as you.

Revive and full restore one ally.

Full-life is a Lv. 7 White Magic spell that costs 20 MP to use. It can be used to either revive one KO'd ally back to full health, or it can be used to instantly KO enemies in the Reaper category. It can be learned by Refia, Trance Terra, and Terra.

Noctis has a similar ability called Comeback. It has the exact same effect, though since it is not classified as a magic spell, it cannot be dual-casted, nor can it be used offensively.

Arise is an active ability that revives all KO'd allies and restores a moderate amount of HP for 7 AP. It can be used by Iris, Kaguya Flan, and Largebuncle.

One of Lenna's cards has Arise as its ability. Arise can only be used during the player's turn, and returned a targeted Forward in their Break zone to the field. It can be used by Dulling Lenna, discarding a Lenna card, and paying four Water CP.

One of Curlax's cards approximates his ability to cast Arise, allowing the player to Dull Curlax to move a Moebius or Laragorn in their Break Zone to the Field.

Arise (also called Life 2) is a single tech that Marle learns. It costs 15 MP to cast and fully revives a single ally.

In Bravely Default, Arise is a level 6 White Magic that revives one target from K.O. and restores all HP. It has a 70% chance to cause death when used on undead enemies and restores up to 9999 HP when not using Bravely Second. It costs 80 MP to use. It can be bought in Grandship (ch 5) for 6400 pg.

In Bravely Second: End Layer, Arise is a level 6 White Magic for the White Mage. It revives a single target from K.O. and restore HP. It has a 70% chance to cause death when used on undead enemies. HP recovery is capped at 9,999 HP when not using Bravely Second. It costs 50 MP to use. It can be bought in Caldisla and Chompshire for 12800 pg. 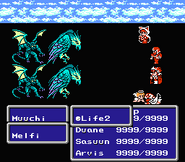 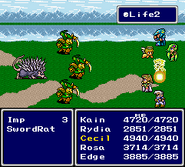 [view · edit · purge]In the Japanese version, the spell name is intended to apply the prefix "A" to indicate the higher tier of Raise (as opposed to apply suffix "ra" or "ga" for the similar purpose) instead of actually romanizing the English word "Arise". Arise is the only example of the affix "A" that still makes its appearance constantly.

Although the Araise name is rarely preserved in English releases, the spell was revealed for Final Fantasy XI as Araise and named Araise on the Test Server, but after players denounced the name Araise, the English localization team stated that it was simply a "temporary" name while the spell was in development. On its full release, the spell was named Arise.[1]