Ariadne (The 4 Heroes of Light)

Boss
Ariadne is a non-playable character from Final Fantasy: The 4 Heroes of Light. She is an elf that was in love with Krinjh, but out of anger, she became the Sand Devil because she wanted to trap Krinjh in the desert.

Ariadne has long silvery hair that fades to pink at the ends and blue eyes. She wears a large pink flower on her head and another on her arm. Her dress is long, pale blue, and flowing, with long trailing sleeves and a golden bodice.

Ariadne is an embittered individual who has kept the people of Guera imprisoned in their city for years because she believed that Krinjh, her former lover, had betrayed and abandoned her. Before this, she was determined enough to disobey the Queen of Arbor and go into exile by giving a magic seedling to the desert town.

Ariadne is first seen when Brandt and the others go to the Quicksand Castle, where they discover she is the Sand Devil. After defeated in the Sand Devil form, she returns to her normal form, but she has little time left. Krinjh apologizes to Ariadne for failing her and then the two disappear into the moonlight.

After being sent decades into the past, the party goes Guera to meet with Krinjh and Ariadne. During this time Krinjh and Ariadne brought a seedling from the Great Tree to Guera in order for the country to prosper. She is revealed to be from Arbor, but giving the Great Tree Seedling to Krinjh caused Ariadne's exile from the city. King Guera orders Krinjh to return to the Moonlight Tower and await further orders, while he goes with Ariadne to the Quicksand Castle. After saving Krinjh from King Guera's monsters, the party goes to the Quicksand Castle to save Ariadne.

The party arrives and discovers King Guera trying at manipulating Ariadne's thoughts about Krinjh and using the powers of the seedling for evil. After the party uses the Merkmal on the King, he takes on the form of the demon, Asmodeus and is defeated. After Asmodeus is defeated, Krinjh and Ariadne give the party the Shield of Light. They become rulers of Guera leading the nation to prosperity. At the end of the game, the party goes to Guera and return the Shield of Light to them.

Ariadne is fought as the Sand Devil in the Quicksand Castle and in the Moonsand Ruins. 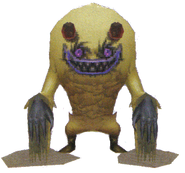 Ariadne as the Sand Devil. 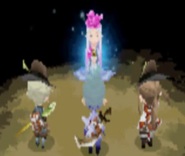 Ariadne speaking with the party.

[view · edit · purge]Ariadne is a Greek name meaning "Very Holy" or "Most Holy". In Greek mythology, Ariadne was the daughter of King Minos. She fell in love with Theseus and helped him escape the Labyrinth and the Minotaur, though he abandoned her. She ended up marrying the god Dionysus.