This barely audible orderly was assigned to assist Class Zero. She never speaks unless spoken to—and even then she doesn't say much, but one cannot help but sense something buried behind her breathy muttering and mumbling...

Aria Luricara is a supporting character from Final Fantasy Type-0. She is a subordinate of Class Zero who sells items.

According to the Rubicus, Aria is 15 years old and 4'9" tall. She has short brunette hair and steel gray eyes. Her outfit consists of white, dark gray and burgundy with a gray-and-white hat, dark vest with a red ribbon and a white blouse underneath, red skirt and dark thigh-high socks and leather boots.

She is quiet and obedient, often to the point that others have to tell her to speak up. Although appearing submissive, Aria is actually a foul-mouthed individual capable of speaking without a filter. It was her mother who forbade her from speaking in such a crude way, resulting in the passive individual known to Class Zero. When given the permission to speak freely, she cracks and becomes boisterous and impulsive. She was said to have received that tendency of speech from her deceased father who lived in a small town near the Concordian border where people used such speech commonly.

Aria can be found in the Entrance during the morning, afternoon and evening.

Aria inherited a crude way of speaking from her father, and her exasperated mother forbade her from speaking unless spoken to. Aria joined Akademeia and becomes the Class Zero orderly when the cadets are officially enrolled, selling them items, but hardly speaks a word even when addressed.

She volunteers to accompany Class Zero to Ingram believing the cadets may need her help. While there she is encouraged by King and Deuce to be more friendly, and she unveils her true loud and cheerful personality. Aria explains she had repressed her true nature due to her mother's instruction to not get on people's nerves. King quickly tires of her and suggests she continue heeding her mother's advice.

Nearby, an imperial trooper notes how much Aria resembles a girl from a Bashtar family portrait hanging in the hotel. The Bashtar family's daughter was said to have died, but the soldier finds Aria's resemblance to her uncanny.

When the rest of Class Zero encounters a crystal jammer inside Hotel Armada, Aria delivers a warning from Kurasame. A Militesi sniper shoots her and Class Zero initially presumes she was killed, though they later realize that they can still remember her. In actuality, she is healed before being placed under the watch of the Militesi General Qator Bashtar.

Aria is grateful and nominates herself as Bashtar's "minion". The tide of battle does not favor the empire and as the dominion forces infiltrate Ingram, Bashtar tells Aria to return to the dominion. She refuses, and pleads Bashtar to not try and "go out in a blaze of glory". Bashtar retorts that he is known as the "Unscathed" for a reason.

Following Qator's demise in preventing the Ultima Bomb from destroying the capital, Aria is found wandering Ingram by two Militesi soldiers. Because Qator had died, the White Tiger Crystal erased all memories of him; thus, Aria and the Militesi soldiers are bewildered and cannot recall she had been put under their watch. Remembering only that she came to Ingram with Class Zero, and that she was shot, Aria tries to recall the person who saved her. The soldiers shoot her before she can say anything, leaving her on the ground.

As she lay dying, Aria lurches upon a strange sensation that restores her memory. She begins to recall her family, realizing the person who raised her wasn't her mother, and ruminates upon having tried to use Qator to fill the void caused by her family's absence. In her final moments, she proclaims that she has found what she has been looking for. During Tempus Finis, an Orderly mentions that she was waiting for someone, but doesn't remembers who.

Aria mans a shop at the Class Zero classroom in Akademeia. When the cadets are staying in Ingram, Aria operates the shop outside Hotel Armada.

Aria's Amulet is an accessory that prevents Burn, Freeze, and Shock. It is available in Chapter 4, Free Time 1 by talking to Aria with the Glass Pendant the inventory (obtained from the Orderly in the fountain court in Chapter 3 Free Time 1).

After Aria is left behind in Ingram, the player can unlock entries in the annals to find out what happened to her by talking to the Orderlies in Akademeia during free time periods.

Aria is voiced by Ai Nonaka in the Japanese version of Final Fantasy Type-0.

In the English version, Aria is voiced by Paula Rhodes. 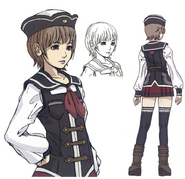 Aria and Qator before the last battle.

Aria in the Type-0 manga.

Screenshot of Aria in Agito.

[view · edit · purge]As a female given name, Aria (אריה) means "lioness" in Hebrew, or "air" in Italian. It also refers to "aria," a self-contained piece for one voice usually, most commonly found in the context of opera.

For her Japanese surname, Rurikara means "from lapis lazuli". [view · edit · purge]Lapis lazuli, sometimes abbreviated to lapis, is a deep blue semi-precious stone that has been prized since antiquity for its intense color. It is the birthstone for December.