Promise me... Promise me you will banish the darkness, and restore peace to the world...

Aria Benett, also known as Elia[note 1] is a guest character from Final Fantasy III. She temporarily joins the party at the Wrecked Ship to restore the Water Crystal and supports the party with protective magic. She is also the first character in the series to have a personal musical theme.

Aria is a young girl with long blonde hair with a small braid in the back tied with a blue ribbon and the rest tied in a ponytail. She has blue eyes and wears a long, plain, white halter-dress.

When Aria meets the party she is relieved since she believes they will save the the world. Refia is doubtful since time is still motionless outside the walls. Aria wants the world to be free from darkness. She is a kind and self-sacrificing woman, protecting the party from Kraken's blast.

Aria is met shortly after the party leaves the Floating Continent for the Surface World. She is found on the Wrecked Ship island in the northern part of the world, lying in bed, watched over by an old man. Aria accompanies the party to the Temple of Water to retrieve the shard of the Crystal of Water. Using this, she can open the door within the Cave of Tides, where the Water Crystal is kept.

If the party speaks with Aria while she follows them, she describes the light that she senses from the Warriors of the Light as strong, yet gentle.

When the party reaches the Water Crystal the group is attacked by Kraken. Aria pushes Luneth out of the way, and takes the blast. After Aria dies from the injuries in Luneth's arms, time flows again in the world, and the party wakes up days later inside an inn in a town named Amur.

In the 3D versions, Aria functions as a White Mage and occasionally casts Protect and Cura during battles.

Aria's theme is "Priestess Aria," which is also sampled in the opening theme from Final Fantasy III. "Once You Meet Her" is a vocal arrangement of her theme featured in the album Final Fantasy: Pray.

Aria is the first protagonist character to have a theme named for them.

Aria is obtainable as a water-elemental summon. She goes by her title, Maiden of Water. 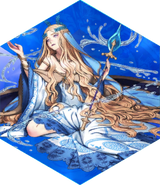 Aria is a playable character who could be initially recruited during the Challenge Event The Maiden of Water as a First Time Reward for completing the event's Hein's Castle stage.

Aria appears as a character and summonable vision. Her ribbon is also an obtainable accessory. She retains her original appearance. She serves as a character representative from Final Fantasy III.

In the Dawn of Souls and 20th Anniversary remakes of the original Final Fantasy, Elia is one of the automatic names the player can choose for the White Mage job.

Aria is the only guest character to appear in the FMV opening.

Aria in the opening FMV (PC).

Aria in the opening FMV (PC). 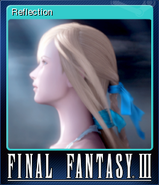 [view · edit · purge]As a female given name, Aria (אריה) means "lioness" in Hebrew, or "air" in Italian. It also refers to "aria," a self-contained piece for one voice usually, most commonly found in the context of opera.

[view · edit · purge]Benett is the medieval form of the word "benedict", meaning blessed.

Her Japanese name is Elia. [view · edit · purge]Elia is the feminine form of Elijah. Elijah means "My god is He."