Darin De Paul
Ardyn Izunia is a playable character in Dissidia Final Fantasy NT and its arcade version. He is a Vanguard type and his EX Skill is Shadowstep. He is the second character and first villain representing Final Fantasy XV.

Ardyn's default costume, called "Chancellor's Attire", is based on his appearance in Final Fantasy XV. He dresses in a black trench coat, maroon-and-ivory-striped vest, white shirt, pinstripe trousers, and black leather shoes. The attire is completed by a red scarf around his neck, a black fedora on his head, and a hooded, gray and white flower-print mantle over his trench coat. He does not carry the winged arm accessory that he sometimes has on him in the game and the movie. Its first alternate coloration turns the fedora, mantle and trench-coat maroon, his vest and trousers a darker shade of maroon, and his scarf and shirt black. Its second alternate coloration turns the fedora, trench-coat, vest and trousers white, and his mantle light gray.

His first alternate costume, "Devotee's Raiment", is an updated version of his appearance in the anime Final Fantasy XV: Episode Ardyn – Prologue. He wears a white tunic that features a white cape and that closes itself around the waist with a white sash. Beneath, there's a grey and white vest, a dark grey sweater and a white high-collared shirt, which in the original concept ( 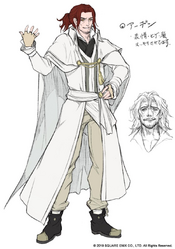 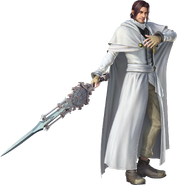 Devotee's Raiment III.
Add a photo to this gallery

Ardyn wields a full Armiger set of royal arms. However, his customizable weapons are one-handed swords. Only his default weapon is wielded by him in Final Fantasy XV and its add-ons, while the rest are brand-new weapons he obtains in Dissidia NT (with the exception of his second alternate weapon, which already existed in Eos, although Ardyn himself does not wield it).

His default weapon is the Rakshasa Blade, his signature weapon named in Episode Ardyn. His first alternate weapon is the Divine Blade, which has a design that evokes to Ardyn's origins and his connection with the present state of his world of origin: the structure of the handle of the weapon resembles the Royal Palace of Insomnia while the blade references the crystal that is housed there. His second alternate weapon is Ifrit's Sword, the weapon of Ifrit from Final Fantasy XV; however the design of this adaptation of the blade is original for Dissidia NT, the blade no longer ending in a hooked shape and with no sash and strings of colors hanging off the handle. His third alternate weapon is the Blade of Ruin, inspired by the illness native in Eos with infecting capabilities.

Ardyn's Blade of Ruin.
Add a photo to this gallery

Ardyn was revealed as the tenth DLC character during the 4th Anniversary of Dissidia Arcade on December 22, 2019. Due to a lack of time, Tetsuya Nomura only drew Ardyn's face for his Dissidia appearance.

Ardyn is voiced in Japanese by the late Keiji Fujiwara, and in English by Darin De Paul, both returning from Final Fantasy XV.

Manikin
Add a photo to this gallery