In the original version, Ardor (Ardour in the PAL version) appears as a Black Magick spell. The spell is regarded as the most powerful Fire-elemental spell that targets all enemies. Ardor can be bought from the bangaa, Burrough, in Barheim Passage after the Pharos is completed. It costs 15,600 gil and 70 License Points, and is cast for 60 MP.

Ardor has the maximum Effect Capacity, which means no other spell or Technick can be performed simultaneously. It is the player version of Firaja and its appearance is unique for a Fire spell as the flames created upon casting are blue instead of the normal red, yellow, or orange; this is to show its increased intensity as blue flames are hotter than red ones.

In the Zodiac versions, Ardor has been moved into the Arcane Magick category and can only be used by Red Battlemage. It is a Level 3 Magick and costs 110 LP. It can be found in a chest at the Pharos at Ridorana Third Ascent/Spire Ravel - 2nd Flight (hidden area northeast).

Although the basic power of Ardor is second to Scathe (175 compared to 190), being a Fire-elemental spell means that the resultant damage can be amplified by certain conditions such as Fire-favorable weather, equipping Fire-enhancing weapons (e.g. Flame Staff), attacking a target with Fire weakness, or suffering the status effect Oil. Combining these factors makes Ardor stronger than Scathe with less MP cost.

In Bravely Default II, Ardour is a job level ability for the Arcanist asterisk. When used, the caster will unleash a magical attack that deals fire and water-elemental damage to all foes and allies on the field.

During the development process, the Red Mage's Inundation White Magic ability was originally named Ardor (アーダー, Ādā?). When implemented into the game in the March 2015 update, the spell had its name changed to Inundation (イナンデーション, Inandēshon?). [1] 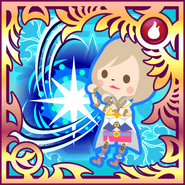 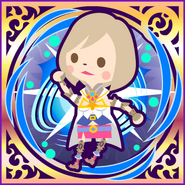 [view · edit · purge]The word "ardor" (or "ardour") is synonymous with passion, fervency and intensity (as well as warmth). The origin of the word comes from Middle English ardour, from Anglo-French & Latin; Anglo-French, from Latin ardor, "burning, heat"; from aridus, "dry".