Now, it is a well-known fact among researchers of arctic monstrosities that the yeti possesses lungs of particular fascination, operating as they do at a temperature colder than ice, making them well-suited to the breathing of frigid air. Unique structures within the yeti's lungs cause atmospheric moisture to form icy tubes, with the openings on either side which permit the flow of air. Over time, these tubular structures grow ever more intricate, and when they are later forcibly removed from the yeti's chest cavity, they become the curious objects known as arctic winds, and are highly collectible.

The Arctic Wind (北極の風, Hokkyoku no Kaze?), also known as North Wind, is a recurring, single-use item in the Final Fantasy series that frequently is used to cause some form of Ice damage to one or more targets (not to be confused with the similarly named Antarctic Wind).

Stone with the same effect as Blizzara

Arctic Wind deals a Blizzara attack to a target.

The Arctic Wind is a throwing weapon dropped from Genbu, with a special use: if it is thrown at Suzaku, it disables his additional Fire damage on melee attacks, making it easier on the tank. The Antarctic Wind serves an inverse function.

A slender cylinder with hollow ends, made of raging arctic winds. Gives off a constant chilling aura of magickal potency.

Arctic Wind appears as loot that can be obtained as a reward for hunting the Catoblepas and dropped by Yeti (10% chance) with the Knight's Monograph. One may be sold toward unlocking the Feathered Boots at the Bazaar. The Arctic Wind may be sold for 1,179 gil.

In the Zodiac versions, it can be poached from Yeti (5% chance).

A frozen substance known as cryocorelite that was cut from the heart of a gigantic ice mass floating in Luxendarc's arctic sea. Raising it up and chanting causes a blast of freezing wind to shoot forth, freezing everything in its path.

Arctic Wind deals major water damage to all enemies (or allies). It can be bought from Adventurer (Norende Village Combat Item Shop Lv. 7) for 2000 pg. It can be found in the Engine Room and Eternia, dropped from Orthros (Ch 1, 4; blue head), Behemoth, and Ice Golem, and stolen from Rusalka (ch 2, 5, 6, 7, 8).

Its effects can be used by compounding Permacrystal x2. 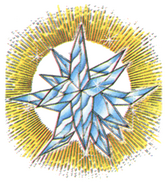 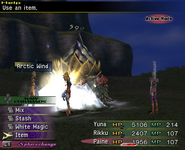 A north wind is a wind that originates in the north and blows south. The north wind has had historical and literal significance, since it often signals cold weather and seasonal change in the Northern hemisphere.