They consist of the Blighted Despot, Scarmiglione, the Drowned King, Cagnazzo, Empress of the Winds, Barbariccia, and Autarch of Flame, Rubicante. The Four Elemental Archfiends allude to Chaos's Four Fiends from the original Final Fantasy.

The Archfiends are minions of Zemus, who placed them under Golbez's command. As the strongest monsters under his control and the generals of his army, the Archfiends are dispatched after Cecil Harvey when he begins searching for a way to become a Paladin. Golbez sends Scarmiglione to Mount Ordeals to kill Cecil, as his undead were immune to Cecil's dark sword. With the assistance of Palom, Porom and Tellah, Cecil defeats Scarmiglione's zombies and as well as Scarmiglione himself, forcing him to reveal his true form as an undead. Cecil prevails and Scarmiglione plummets to his death.

After returning to Baron, the King reveals his true form as Cagnazzo, who had killed the true king some time ago as part of Golbez's plan to take over the kingdom. With his last breath, Cagnazzo collapses the walls of the throne room's antechamber, forcing Palom and Porom to petrify themselves to save Cecil.

After agreeing to exchange the final Crystal Golbez needs for the life of Rosa Joanna Farrell, Cecil and his companions climb the Tower of Zot and defeat the Magus Sisters, minions of Barbariccia. After defeating them and confronting Golbez, Tellah forces him to retreat by unleashing Meteor, and both Rosa and Kain Highwind join Cecil. Barbariccia herself emerges to battle them, using strong winds to avoid many attacks. Through Kain's Jump attacks, Barbariccia's storms are overcome and she dies, collapsing the tower around her.

Rubicante destroys Eblan whose survivors flee to a nearby cave. With Golbez incapacitated after Meteor, and the subsequent battle at the Dwarven Castle, Cecil and his companions turn their attention to the Tower of Babil and retrieving the Crystals. In the underground portion of the tower, the party confronts Dr. Lugae, who tells them Rubicante had moved the Crystals to the upper portion of the tower. After killing Lugae and returning to the surface, the party enters the tower with the assistance of Edge and defeat Rubicante.

Zemus revives the Archfiends in the Giant of Babil in a final chance to redeem themselves and defeat Cecil. They fail and are again destroyed. Their malice survives, and can be battled as the optional superboss, Geryon.

The Crystals summon the Archfiends from the dead in the True Moon Subterrane against their will. After each of them die, they will thank the party, showing a more benign side to themselves.

If Golbez is in the party, they will each recognize and speak with him, showing a great deal of respect as well as happiness. Rydia will note that each Archfiend is as much a part of the world as themselves. Scarmiglione also claims to be a spirit of the land, implying that the Archfiends are living incarnations of the elements of Earth.

Every Archfiend has two battle sprites.

The four Archfiends are fought a final time together in the Giant of Babil after Zemus raised them.

The battle theme that plays whenever fighting the Elemental Archfiends is called "Battle with Golbez's Four Emperors".

The Archfiends appear in the Game Boy Advance and PlayStation Portable remakes as optional bosses in Hellfire Chasm, one of the bonus dungeons for the remakes.

There are four equipment pieces named for the Archfiends—Barbariccia's Wristlet, Rubicante's Cowl, Cagnazzo's Carapace, and Scarmiglione's Fang. When all four are equipped, the wearer gains the "Elemental Archfiend" combination.

In Dissidia 012, they also give the player tutorials in the Labyrinth.

The four Archfiends appear as enemies.

The four Archfiends appear as enemies. 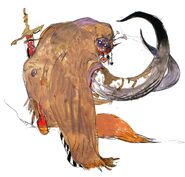 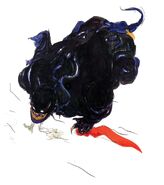 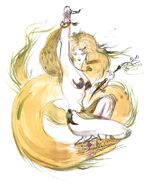 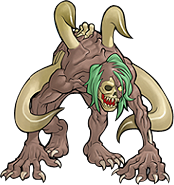 Dawn of Souls artwork of Scarmiglione.

Dawn of Souls artwork of Cagnazzo.

Dawn of Souls artwork of Barbariccia.

Dawn of Souls artwork of Rubicante. 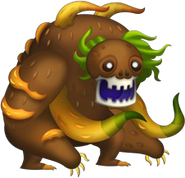 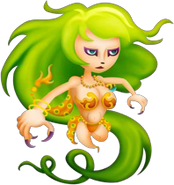 The four Archfiends are named after four of the twelve named Malebranches in the 8th Circle of Hell, the Malebolge, from Dante's Divine Comedy. In particular, "barba riccia" is Italian for "curly beard", an obviously male attribute; despite this, the Archfiend Barbariccia is the only one with clear female features.