A member of a race of daemons that has existed since the age of myth. It employs the destructive Dark Arts.

Archaeodaemons (アルケオデーモン, Arukeodēmon?), also known as Archaic Demons, are servants of the Lucavi in Final Fantasy Tactics. They are quite powerful, and cast many powerful spells, including Unholy Darkness. Archaeodaemons first appear during the fight with Belias, and also appear during the battle with the undead Zalbaag Beoulve along with their more powerful Ultima Demon counterparts. In addition, an Archaeodaemon named Syneugh (also called Sinogue) appears in the coal mines of Gollund.

Archaeodaemons are immune to Holy-elemental attacks, just like the Ultima Demons.

The damage formula for Unholy Darkness is as follows:

The damage formula for Gigaflare is as follows:

Archaeodaemon appears as an enemy. 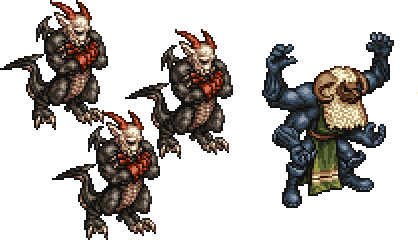 The Archeodemon is an enemy that appears in the Final Fantasy Tactics exchange event The Auracite Chosen. He is the boss battle for the stage 'Chosen by the Stone - BGN'.

The archaeodaemons appear as strong enemies inside the Return to Ivalice series of raids. They appear in the Royal City of Rabanastre as the second set of mob encounters and are additional enemies summoned by Yiazmat during the final boss encounter of the Ridorana Lighthouse. Gilbrisbert quo Buteo also summons archaeodaemons in Zadnor.

They have access to many of the abilities from their original appearance in Final Fantasy Tactics.