The self-proclaimed guardians of law and order in Archadia. They're the Elite Guard of House Solidor. Which effectively makes them the commanders of the Imperial Army.

The Archadian Judges in Final Fantasy XII are the de facto guardians of law and order in the Archadian Empire, making them in effect the nation's Supreme Court, and commanders of the Archadian military. They are also the elite guards of House Solidor, the Archadian ruling family. Judges are referred to as "your honor" by both outsiders and each other. 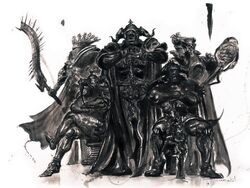 The Archadian Judges are a special order of knights under the Imperial Archadian Ministry of Law. With the spread of Archadian influence came a rise in crime and regional conflicts. To reduce the amount of time required by judicial process, House Solidor introduced legislation bringing a military court into existence, this being the origin of the Order of Judges. They are the supreme enforcers of Archadian law in the world of Ivalice. Each wields extraordinary legal power in his or her own right over lower-ranked Archadian officers.

The higher ranked Judge Magisters, in addition to functioning as chief arbiters and enforcers of Archadian law, are also the elite guard of House Solidor which effectively makes them the commanders of the Imperial Army.

The Judge Magisters wield quite a bit of magickal and physical power. They are called on sometimes to guard high profile people, such as Princess Ashe or Lord Larsa. They are also sent on the most sensitive and important missions, such as retrieving the Dusk Shard or the Sword of Kings.

Judge Magisters are always seen in full plate armor and are rarely seen with their helmets off. Each Judge Magister has a unique set of armor with complex helmet ornamentation, usually including horns. All known Judge Magisters are humes, and Judge Gabranth once states to Ba'Gamnan that the Archadian Empire only employs humes in their military.

This is a list of Judges, currently active and inactive from the beginning of Final Fantasy XII.

Judges appear as enemies, often accompanying the Judge Magisters in battle. Ghis, Bergan and Gabranth are fought as bosses during the story.

Trial Mode is a bonus mode exclusive to the Zodiac versions. Its stage 100 battle is against all Judge Magisters: Judge Gabranth, Judge Ghis, Judge Bergan, Judge Drace, and Judge Zargabaath. This is the final level of the trial and considered its ultimate challenge. This thus adds Drace and Zargabaath, who are not fought as bosses during the main storyline.

The "Theme of the Empire" is played in many scenes associated with the Archadian Empire. The theme "Upheaval (Imperial Version)" plays in all the boss battles against the Judges.

Some of the Judge Magisters appear in Final Fantasy Record Keeper.

Bergan, Gabranth and Drace appear on a job card.