The most prominent fleet in the story is the Western Armada, under the command of Vayne Solidor, Consul of Rabanastre, which commands the skies and seas within Archadia's western territories. The airships are named after summons in the series.

Each fleet consists of several Light Cruiser and Cruiser Class ships, and is usually led by a Dreadnought Class ship. While the exact number of fleets is never revealed, there are at least 12 fleets.

Led by the Odin, this fleet was part of the large fleet involved with guarding Archadia from the Resistance fleet.

The fleet called in to replace the 8th fleet, which has been decimated during their flight above Jagd Yensa.

The 8th Fleet is a formidable force, and the fleet most featured in Final Fantasy XII. The entire fleet is led by Judge Ghis, onboard his ship the Leviathan.

The following ships are part of the 8th fleet:

However, this fleet was sunk when Judge Ghis tried using the Dawn Shard. Every ship sank in the heavy mist explosion. Later, the fleet is reassembled, and the Shiva is seen taking place in the final airship battle involving the Sky Fortress Bahamut. It is probably the very same ship that is seen with Leviathan, as Shiva is seen to fall towards the Sandsea, to detonate with the rest of the 8th Fleet during the mist explosion induced by the Dawn Shard.

The 12th Fleet is led by Judge Zargabaath onboard the Alexander. This fleet was formed after Vayne killed his father and was to be used if Rozarria would attempt to invade as the bulk of the Archadian force. It is mostly involved with protecting the Bahamut during the Resistance Battle above Rabanastre.

The ships of the Archadian Fleets are usually separated into several classes, each with a specific purpose.

Light ships meant for lesser combat. They usually have small gun turrets, and even engage foot soldiers in combat. Two classes of fighter are the Air Cutter Remora and Valfarre.

Not meant for heavy battles, they have weaker armor and lighter weaponry than most other ships. As such, they are much better at high-speed maneuvers and attacking in groups. The Shiva is a Light Cruiser Class ship.

Heavy ships more suited for actual battle. They have much tougher armor than their light counterparts, and a lot of cannons in their arsenal. The Ifrit is a Cruiser Class ship.

Heavily armored ships, these ships are not meant for battle. Instead, they act as walls and carry troops to their destination. They are the biggest class of ships, and have entire hangars hidden in them. The Alexander is a Heavy Carrier Class ship.

An all-round battle ship, the Dreadnought Class is engineered for combat. Its armor is impossible to penetrate, and its firepower is unmatched. This class of ship is usually in charge of an entire fleet. The Leviathan is a Dreadnought Class ship.

The ultimate class, there is only one ship in the Archadian fleet that bears this title, the Bahamut. Gigantic, this class is very slow, and requires an enormous amount of energy to power. However, its firepower is devastating, sporting a mist cannon that can destroy entire ships in one shot. As well as having this immense power to destroy ships, it carried within itself thousands of small fighters capable of fending off attacks from smaller attack groups. 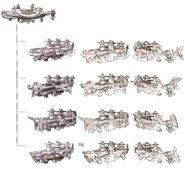 Ifrit fires at the resistance.