Never imagined I'd ever come this far away from home.

The most common way is via airship. This method is patrolled for trouble by the Archadian Judges. The second way is up through the Sochen Cave Palace, into Old Archades and across the bridge into Archades proper.

The capital of the Archadian Empire. Still small when it first formed as a city-state, it grew tremendously during the long peace fostered by the Galtean Alliance. When the Empire was formed, the city center was re-located, forming the Archades we know today. Though poor in both natural resources and land, Archades came to prominence as a city of innovation and learning. All information and technology gathers here, and the famed mages and artificers born within her walls are legion. Knowledge, then, is the true strength of the Archadian Empire. The city of Archades forms an octagon with the Imperial Palace at its center. Around the Palace sit the Senate Chambers and other administrative quarters, beyond which lies a booming mercantile district. The buildings in the city center are quite tall, with the lower floors being used mainly as residences. The difference in heights between the various buildings makes this a city of small airships, that being the most efficient means of accessing all levels of the metropolis. More than half the population of Archades is hume, and while at one time all lived near the ground, of late, those of power or particular wealth have taken to living in the higher apartments and traveling exclusively by private airship.

The party passes by the modern city of Archades to head to Draklor Laboratories to confront Dr. Cid. Vaan and Penelo comment on the city while Balthier leaves since he has business to attend to. Balthier meets with his old friend Jules, who steals the chops Balthier gave him to give to the rest of the party. The party needs to earn Pine Chops to proceed and, after they have the right number of chops, they are allowed to proceed to Tsenoble. Arriving in Tsenoble, Balthier rejoins the party, and they head to Draklor Laboratories to confront Dr. Cid.

The city is divided in two levels: one consisting of the districts of "Nilbasse", "Trant", "Molberry", and "Rienna" and the upper level of "Tsenoble". There are no poor within the city of Archades proper, all of the poor find themselves in Old Archades. Dr. Cid bases all of his research out of the Draklor Laboratory, found within the city in the Tsenoble area.

Archades residents tend to be rich and arrogant. Most people there are more interested in having a good reputation—usually of being well informed—than in money or riches. Well informed people in Archades can earn chops by giving information to other residents about a particular subject. The chops are then used as proof of status, granting access to Tsenoble via taxi. Certain areas in Tsenoble can only be accessed by those who possess a sandalwood chop. The Archades Aerodrome has skyferry flights to Balfonheim Port, Nalbina and Rabanastre for 200 gil and the player can dock the Strahl there.

Old Archades is where all of the poor and destitute from Archades wind up. It is run down and barely patrolled by the Judges, who appear to be more interested in keeping the poor in their place. The only way into Archades is with money, so all of the citizens dream of finding a way to earn enough to see them safely into Archades.

Where chops are the most important trade item in Archades, gossip is the most important in Old Archades. If there's one way to get ahead it is by finding out as much information as possible to make the way up into Archades through gaining fortune.

Old Archades can be accessed via the ruins of the Sochen Palace.

Sochen Cave Palace is an ancient palace overrun with several undead creatures. The only royalty currently residing within the temple are a family of Mandragoras led by the Onion Queen. These Mandragoras have caused problems for hunters in the Archadian wilderness.

Several ancient and powerful creatures are locked away in the depths of the Sochen, including one of the game's superbosses, the Hell Wyrm.

An old lift device connects Sochen to Old Archades, whilst the entrance to the destitute palace lies within the Tchita Uplands.

The Laboratories are actually a series of rooms on multiple floors. Each floor has a garrison of Judges on it, as well as several smaller labs manned by Imperial scientists. The top floor houses Cid's personal open air lab.

In the original version, there is no treasure to be found in Archades.

In the Zodiac versions, a single chest has been added in Archades. It has a 5% spawn rate, and typically only holds junk Knots of Rust or small amounts of gil. However with the Diamond Armlet equipped, one can find the extremely rare item, Dark Energy.

To proceed in the storyline the player needs to play the information exchange minigame to earn Pine Chops. The story proceeds after either nine or three (Zodiac Age) chops, but if the player collects all, the chops can be traded in for a Sandalwood Chop on the second floor of any merchant shop by talking with the Chopmaster. The Sandalwood Chop grants entrance to Archades's Highgarden Terrace. Pine Chops are earned by connecting people with information in the various sections of Archades, by matching pairs of people.

In Final Fantasy XII The Zodiac Age, the player may proceed to ride the cab after having collected only three chops. The player can also speed the quest considerably by activating high-speed mode.

The Darksteel is a Rank IV Mark whose hunt becomes available upon reaching Archades. The Darksteel can be found in the Temptation Eluded area of the Sochen Cave Palace and all of the other enemies will be cleared out when the player enters it. It is petitioned by the Homesick Man in Archades's armor shop.

The Overlord is a Rank VI Mark whose hunt can be undertaken after the events in the Draklor Laboratory. The Overlord can be found in the Doubt Abandoned area of the Sochen Cave Palace. The Insecure Seeq assists the party in battle, but he falls in one shot from Overlord's Pyromania. The seeq is the petitioner, found in the technick shop in Archades.

The owner of the Hunt Club can be found on the Highgarden Terrace (can only be accessed with a Sandalwood Chop, see above). He will reward the player with zodiac gems for killing trophy monsters.

If the player helped July in Nalbina Fortress earlier in the game, she will reward them with a Salamand Halcyon at Charlotte's Magickery.

A cockatrice called Agytha is in the Grand Arcade area in the Central area of Archades, looking for a husband. The player must have a Sandalwood Chop to access the area, by earning all the available chops and trading them in a shop. The player must speak to a male Cockatrice in the Alley of Low Whispers area in Old Archades, then tell Agytha where to look to get a Tumulus.

The map can be bought in the Technick shop in Molberry for 230 gil.

"Theme of the Empire"

"Theme of the Empire" (帝国のテーマ, Teikoku no teema?) plays as the background music to the Imperial City of Archades. A piano arrangement of the theme is included on the Piano Collections: Final Fantasy XII album.

The Imperial City of Archades appears as the FMS for several Final Fantasy XII themes:

According to Isamu Kamikokuryo, the Imperial City of Archades is inspired by the Dream Zanarkand in Final Fantasy X.[1]

If the player arrives in Archades via the Gate Crystal, they can talk to the 'Prideful Boy' nearby, who complains about people using teleports.

Promotional artwork for The Zodiac Age. 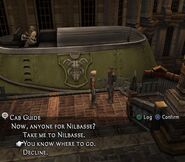 Gabranth arrives to the imperial palace.